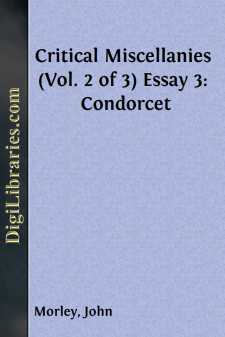 Of the illustrious thinkers and writers who for two generations had been actively scattering the seed of revolution in France, only Condorcet survived to behold the first bitter ingathering of the harvest. Those who had sown the wind were no more; he only was left to see the reaping of the whirlwind, and to be swiftly and cruelly swept away by it. Voltaire and Diderot, Rousseau and Helvétius, had vanished, but Condorcet both assisted at the Encyclopædia and sat in the Convention; the one eminent man of those who had tended the tree, who also came in due season to partake of its fruit; at once a precursor, and a sharer in the fulfilment. In neither character has he attracted the goodwill of any of those considerable sections and schools into which criticism of the Revolution has been mainly divided. As a thinker he is roughly classed as an Economist, and as a practical politician he figured first in the Legislative Assembly, and then in the Convention. Now, as a rule, the political parties that have most admired the Convention have had least sympathy with the Economists, and the historians who are most favourable to Turgot and his followers, are usually most hostile to the actions and associations of the great revolutionary chamber successively swayed by a Vergniaud, a Danton, a Robespierre. Between the two, Condorcet’s name has been allowed to lie hidden for the most part in a certain obscurity, or else has been covered with those taunts and innuendoes, which partisans are wont to lavish on men of whom they do not know exactly whether they are with or against them.

Generally the men of the Revolution are criticised in blocks and sections, and Condorcet cannot be accurately placed under any of these received schools. He was an Economist, but he was something more; for the most characteristic article in his creed was a passionate belief in the infinite perfectibility of human nature. He was more of a Girondin than a Jacobin, yet he did not always act, any more than he always thought, with the Girondins, and he did not fall when they fell, but was proscribed by a decree specially levelled at himself. Isolation of this kind is assuredly no merit in political action, but it explains the coldness with which Condorcet’s memory has been treated; it flowed from some marked singularities both of character and opinion which are of the highest interest, if we consider the position of the man and the lustre of that ever-memorable time. ‘Condorcet,’ said D’Alembert, ‘is a volcano covered with snow.’ Said another, less picturesquely: ‘He is a sheep in a passion.’ ‘You may say of the intelligence of Condorcet in relation to his person,’ wrote Madame Roland, ‘that it is a subtle essence soaked in cotton.’ The curious mixture disclosed by sayings like these, of warm impulse and fine purpose with immovable reserve, only shows that he of whom they were spoken belonged to the class of natures which may be called non-conducting. They are not effective, because without this effluence of power and feeling from within, the hearer or onlooker is stirred by no sympathetic thrill....