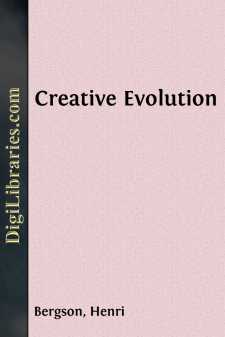 The history of the evolution of life, incomplete as it yet is, already reveals to us how the intellect has been formed, by an uninterrupted progress, along a line which ascends through the vertebrate series up to man. It shows us in the faculty of understanding an appendage of the faculty of acting, a more and more precise, more and more complex and supple adaptation of the consciousness of living beings to the conditions of existence that are made for them. Hence should result this consequence that our intellect, in the narrow sense of the word, is intended to secure the perfect fitting of our body to its environment, to represent the relations of external things among themselves—in short, to think matter. Such will indeed be one of the conclusions of the present essay. We shall see that the human intellect feels at home among inanimate objects, more especially among solids, where our action finds its fulcrum and our industry its tools; that our concepts have been formed on the model of solids; that our logic is, pre-eminently, the logic of solids; that, consequently, our intellect triumphs in geometry, wherein is revealed the kinship of logical thought with unorganized matter, and where the intellect has only to follow its natural movement, after the lightest possible contact with experience, in order to go from discovery to discovery, sure that experience is following behind it and will justify it invariably.

But from this it must also follow that our thought, in its purely logical form, is incapable of presenting the true nature of life, the full meaning of the evolutionary movement. Created by life, in definite circumstances, to act on definite things, how can it embrace life, of which it is only an emanation or an aspect? Deposited by the evolutionary movement in the course of its way, how can it be applied to the evolutionary movement itself? As well contend that the part is equal to the whole, that the effect can reabsorb its cause, or that the pebble left on the beach displays the form of the wave that brought it there. In fact, we do indeed feel that not one of the categories of our thought—unity, multiplicity, mechanical causality, intelligent finality, etc.—applies exactly to the things of life: who can say where individuality begins and ends, whether the living being is one or many, whether it is the cells which associate themselves into the organism or the organism which dissociates itself into cells? In vain we force the living into this or that one of our molds. All the molds crack. They are too narrow, above all too rigid, for what we try to put into them. Our reasoning, so sure of itself among things inert, feels ill at ease on this new ground. It would be difficult to cite a biological discovery due to pure reasoning. And most often, when experience has finally shown us how life goes to work to obtain a certain result, we find its way of working is just that of which we should never have thought.

Yet evolutionist philosophy does not hesitate to extend to the things of life the same methods of explanation which have succeeded in the case of unorganized matter. It begins by showing us in the intellect a local effect of evolution, a flame, perhaps accidental, which lights up the coming and going of living beings in the narrow passage open to their action; and lo! forgetting what it has just told us, it makes of this lantern glimmering in a tunnel a Sun which can illuminate the world. Boldly it proceeds, with the powers of conceptual thought alone, to the ideal reconstruction of all things, even of life. True, it hurtles in its course against such formidable difficulties, it sees its logic end in such strange contradictions, that it very speedily renounces its first ambition. "It is no longer reality itself," it says, "that it will reconstruct, but only an imitation of the real, or rather a symbolical image; the essence of things escapes us, and will escape us always; we move among relations; the absolute is not in our province; we are brought to a stand before the Unknowable."—But for the human intellect, after too much pride, this is really an excess of humility. If the intellectual form of the living being has been gradually modeled on the reciprocal actions and reactions of certain bodies and their material environment, how should it not reveal to us something of the very essence of which these bodies are made? Action cannot move in the unreal. A mind born to speculate or to dream, I admit, might remain outside reality, might deform or transform the real, perhaps even create it—as we create the figures of men and animals that our imagination cuts out of the passing cloud....