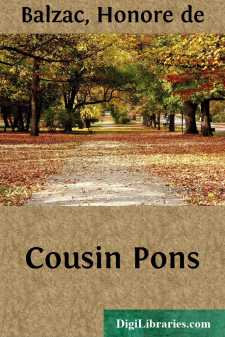 Towards three o'clock in the afternoon of one October day in the year 1844, a man of sixty or thereabouts, whom anybody might have credited with more than his actual age, was walking along the Boulevard des Italiens with his head bent down, as if he were tracking some one. There was a smug expression about the mouth—he looked like a merchant who has just done a good stroke of business, or a bachelor emerging from a boudoir in the best of humors with himself; and in Paris this is the highest degree of self-satisfaction ever registered by a human countenance.

As soon as the elderly person appeared in the distance, a smile broke out over the faces of the frequenters of the boulevard, who daily, from their chairs, watch the passers-by, and indulge in the agreeable pastime of analyzing them. That smile is peculiar to Parisians; it says so many things—ironical, quizzical, pitying; but nothing save the rarest of human curiosities can summon that look of interest to the faces of Parisians, sated as they are with every possible sight.

A saying recorded of Hyacinthe, an actor celebrated for his repartees, will explain the archaeological value of the old gentleman, and the smile repeated like an echo by all eyes. Somebody once asked Hyacinthe where the hats were made that set the house in a roar as soon as he appeared. "I don't have them made," he said; "I keep them!" So also among the million actors who make up the great troupe of Paris, there are unconscious Hyacinthes who "keep" all the absurd freaks of vanished fashions upon their backs; and the apparition of some bygone decade will startle you into laughter as you walk the streets in bitterness of soul over the treason of one who was your friend in the past.

In some respects the passer-by adhered so faithfully to the fashions of the year 1806, that he was not so much a burlesque caricature as a reproduction of the Empire period. To an observer, accuracy of detail in a revival of this sort is extremely valuable, but accuracy of detail, to be properly appreciated, demands the critical attention of an expert flaneur; while the man in the street who raises a laugh as soon as he comes in sight is bound to be one of those outrageous exhibitions which stare you in the face, as the saying goes, and produce the kind of effect which an actor tries to secure for the success of his entry. The elderly person, a thin, spare man, wore a nut-brown spencer over a coat of uncertain green, with white metal buttons. A man in a spencer in the year 1844! it was as if Napoleon himself had vouchsafed to come to life again for a couple of hours.

The spencer, as its name indicates, was the invention of an English lord, vain, doubtless, of his handsome shape. Some time before the Peace of Amiens, this nobleman solved the problem of covering the bust without destroying the outlines of the figure and encumbering the person with the hideous boxcoat, now finishing its career on the backs of aged hackney cabmen; but, elegant figures being in the minority, the success of the spencer was short-lived in France, English though it was....