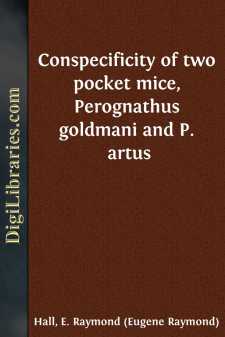 Perognathus goldmani Osgood and Perognathus artus Osgood from southern Sonora, northern Sinaloa and adjoining parts of Chihuahua and Durango, are two named kinds of the Perognathus intermedius group of pocket mice, of the subgenus Chaetodipus. Until now the two kinds have been treated in the literature as two species. In both goldmani and artus the upper parts are Ochraceous-Buff (capitalized color terms after Ridgway, Color Standards and Color Nomenclature, Washington, D. C., 1912) having a strong admixture of black. The lateral line is Ochraceous-Buff, and the underparts are white. P. goldmani is larger than P. artus (see measurements beyond) and has more inflated tympanic bullae and a relatively narrower (transverse to long axis of skull) interparietal bone.