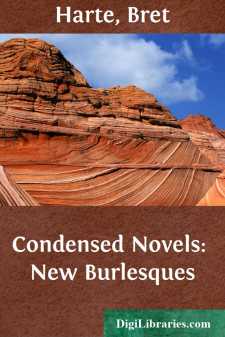 When I state that I was own brother to Lord Burleydon, had an income of two thousand a year, could speak all the polite languages fluently, was a powerful swordsman, a good shot, and could ride anything from an elephant to a clotheshorse, I really think I have said enough to satisfy any feminine novel-reader of Bayswater or South Kensington that I was a hero. My brother's wife, however, did not seem to incline to this belief.

"A more conceited, self-satisfied little cad I never met than you," she said. "Why don't you try to do something instead of sneering at others who do? You never take anything seriously—except yourself, which isn't worth it. You are proud of your red hair and peaked nose just because you fondly believe that you got them from the Prince of Trulyruralania, and are willing to think evil of your ancestress to satisfy your snobbish little soul. Let me tell you, sir, that there was no more truth about that than there was in that silly talk of her partiality for her husband's red-haired gamekeeper in Scotland. Ah! that makes you start—don't it? But I have always observed that a mule is apt to remember only the horse side of his ancestry!"

Whenever my pretty sister-in-law talks in this way I always try to forget that she came of a family far inferior to our own, the Razorbills. Indeed, her people—of the Nonconformist stock—really had nothing but wealth and rectitude, and I think my brother Bob, in his genuine love for her, was willing to overlook the latter for the sake of the former.

My pretty sister-in-law's interest in my affairs always made me believe that she secretly worshiped me—although it was a fact, as will be seen in the progress of this story, that most women blushed on my addressing them. I used to say it "was the reflection of my red hair on a transparent complexion," which was rather neat—wasn't it? And subtle? But then, I was always saying such subtle things.

"My dear Rose," I said, laying down my egg spoon (the egg spoon really had nothing to do with this speech, but it imparted such a delightfully realistic flavor to the scene), "I'm not to blame if I resemble the S'helpburgs."

"It's your being so beastly proud of it that I object to!" she replied. "And for Heaven's sake, try to BE something, and not merely resemble things! The fact is you resemble too much—you're ALWAYS resembling. You resemble a man of fashion, and you're not; a wit, and you're not; a soldier, a sportsman, a hero—and you're none of 'em. Altogether, you're not in the least convincing. Now, listen! There's a good chance for you to go as our attache with Lord Mumblepeg, the new Ambassador to Cochin China. In all the novels, you know, attaches are always the confidants of Grand Duchesses, and know more state secrets than their chiefs; in real life, I believe they are something like a city clerk with a leaning to private theatricals. Say you'll go! Do!"

"Good old bounder!" she said, "and don't think too much of that precious Prince Rupert....