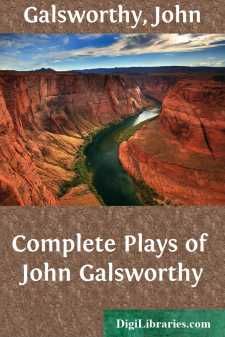 The curtain rises on the BARTHWICK'S dining-room, large, modern, and well furnished; the window curtains drawn. Electric light is burning. On the large round dining-table is set out a tray with whisky, a syphon, and a silver cigarette-box. It is past midnight.

A fumbling is heard outside the door. It is opened suddenly; JACK BARTHWICK seems to fall into the room. He stands holding by the door knob, staring before him, with a beatific smile. He is in evening dress and opera hat, and carries in his hand a sky-blue velvet lady's reticule. His boyish face is freshly coloured and clean-shaven. An overcoat is hanging on his arm.

JACK. Hello! I've got home all ri——[Defiantly.] Who says I sh'd never 've opened th' door without 'sistance. [He staggers in, fumbling with the reticule. A lady's handkerchief and purse of crimson silk fall out.] Serve her joll' well right—everything droppin' out. Th' cat. I 've scored her off—I 've got her bag. [He swings the reticule.] Serves her joly' well right. [He takes a cigarette out of the silver box and puts it in his mouth.] Never gave tha' fellow anything! [He hunts through all his pockets and pulls a shilling out; it drops and rolls away. He looks for it.] Beastly shilling! [He looks again.] Base ingratitude! Absolutely nothing. [He laughs.] Mus' tell him I've got absolutely nothing.

[He lurches through the door and down a corridor, and presently returns, followed by JONES, who is advanced in liquor. JONES, about thirty years of age, has hollow cheeks, black circles round his eyes, and rusty clothes: He looks as though he might be unemployed, and enters in a hang-dog manner.]

JACK. Sh! sh! sh! Don't you make a noise, whatever you do. Shu' the door, an' have a drink. [Very solemnly.] You helped me to open the door—I 've got nothin, for you. This is my house. My father's name's Barthwick; he's Member of Parliament—Liberal Member of Parliament: I've told you that before. Have a drink! [He pours out whisky and drinks it up.] I'm not drunk [Subsiding on a sofa.] Tha's all right. Wha's your name? My name's Barthwick, so's my father's; I'm a Liberal too—wha're you?

JONES. [In a thick, sardonic voice.] I'm a bloomin' Conservative. My name's Jones! My wife works 'ere; she's the char; she works 'ere.

JACK. Jones? [He laughs.] There's 'nother Jones at College with me. I'm not a Socialist myself; I'm a Liberal—there's ve—lill difference, because of the principles of the Lib—Liberal Party. We're all equal before the law—tha's rot, tha's silly. [Laughs.] Wha' was I about to say? Give me some whisky.

[JONES gives him the whisky he desires, together with a squirt of syphon.]

Wha' I was goin' tell you was—I 've had a row with her. [He waves the reticule.] Have a drink, Jonessh 'd never have got in without you—tha 's why I 'm giving you a drink. Don' care who knows I've scored her off. Th' cat! [He throws his feet up on the sofa.] Don' you make a noise, whatever you do. You pour out a drink—you make yourself good long, long drink—you take cigarette—you take anything you like....