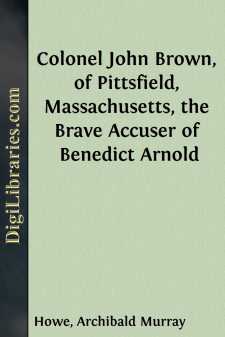 THE BRAVE ACCUSER OF BENEDICT ARNOLD.

John Brown, of Pittsfield, Mass., now almost forgotten, was a patriot in our Revolution of 1775 whose career has been described more than once by men in New York and in Berkshire County, but, as it is now time to give more impartial views of the controversy, perhaps another sketch of the life of this leader may encourage others to search for clearer views of the ways by which our ancestors established the institutions which we hope are to endure.

Daniel Brown, the father of Colonel John Brown, came from Haverhill, Mass., to the western part of the Commonwealth in 1752, when his son John was eight years old. He seems to have been first in the beautiful town of Sandisfield to take part in its local government, both secular and ecclesiastical. "Deacon Brown" is called prosperous when this new town on the banks of the Farmington River, east of the hills of the Housatonic, bade fair to equal Pittsfield as a trading-place. "The Deacon" was a local magistrate under the king, when laymen served as judges. John, his youngest son, is described as tall and powerful, an athlete able to kick a football over the elm-tree on the college green at New Haven when he entered at twenty-three years of age, older in years than most college students of the year 1767.

It is believed that he prepared for college with some citizen of the neighborhood, and it is known that he married before graduating in 1771.

While at New Haven, he was fully informed of the peculiarities of Benedict Arnold, then a storekeeper, already disgraced in the eyes of respectable citizens because of his desertion from the British army and his reckless disregard for the rights of his creditors; for then the debtor was not allowed to retain his respectability, if he failed dishonestly. Furthermore, his self-assertion was recognized as too often a display of arrogance and vanity. Brown's sister Elizabeth had married Oliver Arnold, attorney-general of Rhode Island, a cousin of Benedict, and it is reasonable to suppose that he was well informed of Arnold's misdeeds, which thus became known to John Brown.

In 1771, when he was graduated from Yale, only twenty men were of his class. Quite a large number of Yale graduates took part with the patriots, and Humphreys, one of the class of 1771, was aide-de-camp to Washington. He, I believe, is the only writer in verse who extolled this John Brown. How often we are indebted to poets for our heroes! If this John Brown had incited an insurrection and been hanged for killing his fellow-men contrary to law in time of peace, "his soul might be marching on." If, when he rode from Ticonderoga on horse at a high rate of speed to Philadelphia, to inform the Continental Congress that his friend Ethan Allen had taken possession of the fortress with its guns and materials for war, some poet had described his ride, as Longfellow portrayed Paul Revere's, the school children would still recall Brown of Pittsfield; but, my friends, 'tis of little moment that we are soon forgotten, if it be certain that, while we live, we live with moral courage in the life of every day.

I do not intend to put much emphasis upon military glory. I am trying to show that Brown's life by reason of its entire sincerity, although at times unsuccessful, was led, so far as we can know, by "a man every inch a man," holding fast to his ideals, fearless in the assertion of truth as he saw it, and directed by high principle; that, having all these noble attributes, his part in public affairs should now and then be rehearsed to show the value of goodness even amid the horrors of war.

On December 10, 1772, a few months after graduation from Yale College, he was admitted to practise law in New York in the courts of Tryon County, a part of which is now Montgomery County, bearing the name of one of our noblest American generals, who led the attack on Quebec in December, three years later, where Brown served under him as a major of a Berkshire County regiment. Some writers call Brown king's attorney at Caughnawaga, whether rightly I know not, nor do I know why he came to the Mohawk Valley from Berkshire, for Pittsfield was a growing frontier town. Perhaps Sir William Johnson's influence and his busy settlement offered some inducement to the young attorney, but it did not long have weight with him, for we find him in 1773 at Pittsfield, where another attorney of Loyalist tendencies had left town under coercion.

Before I attempt to describe the civil and military career of John Brown from 1773 to his thirty-sixth birthday, when he was killed at Stone Arabia, I wish to call your attention to the peculiarities of the political situation in Berkshire County and its vicinity. On the north the New Hampshire Grants (now Vermont) had recently been disputed territory where local partisans, Ethan Allen and others, used coercion to maintain the claims of settlers against New York men claiming title. New York Colony on the west, though directed largely by men of high character like Philip Schuyler, was torn by bitter political differences, the Loyalist element being strong in social and political affairs....