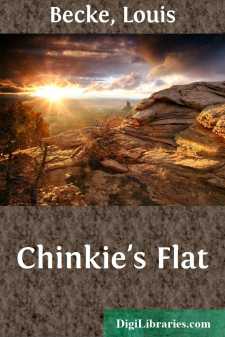 "Chinkie's Flat," In its decadence, was generally spoken of, by the passing traveller, as a "God-forsaken hole," and it certainly did present a repellent appearance when seen for the first time, gasping under the torrid rays of a North Queensland sun, which had dried up every green thing except the silver-leaved ironbarks, and the long, sinuous line of she-oaks which denoted the course of Connolly's Creek on which it stood.

"The township" was one of the usual Queensland mining type, a dozen or so of bark-roofed humpies, a public-house with the title of "The Digger's Best," a blacksmith's forge, and a quartz-crushing battery.

The battery at Chinkie's Flat stood apart from the "township" on a little rise overlooking the yellow sands of Connolly's Creek, from whence it derived its water supply—when there happened to be any water in that part of the creek. The building which covered the antiquated five-stamper battery, boiler, engine, and tanks, was merely a huge roof of bark supported on untrimmed posts of brigalow and swamp gum, but rude as was the structure, the miners at Chinkie's Flat, and other camps in the vicinity, had once been distinctly proud of their battery, which possessed the high-sounding title of "The Ever Victorious," and had achieved fame by having in the "good times" of the Flat yielded a certain Peter Finnerty two thousand ounces of gold from a hundred tons of alluvial. The then owner of the battery was an intelligent, but bibulous ex-marine engineer, who had served with Gordon in China, and when he erected the structure he formally christened it "The Ever Victorious," in memory of Gordon's army, which stamped out the Taeping rebellion.

The first crushing put through was Finnerty's, and when the "clean-up" was over, and the hundreds of silvery balls of amalgam placed in the retorts turned out over one hundred and sixty-six pounds' weight of bright yellow gold, Chinkie's Flat went wild with excitement and spirituous refreshment.

In less than three months there were over five hundred diggers on the field, and the "Ever Victorious" banged and pounded away night and day, the rattle and clang of the stamps only ceasing at midnight on Saturday, and remaining silent till midnight on Sunday, the Sabbath being devoted "to cleaning-up," retorting the amalgam, and overhauling and repairing the machinery, and for relaxation, organising riding parties of twenty or thirty, and chasing Chinamen, of whom there were over three hundred within a radius of twenty miles.

The rich alluvial of Chinkie's Flat had, as a matter of fact, been first discovered by a number of Chinese diggers, who were each getting from five to ten ounces of gold per day, when they were discovered by the aforesaid Peter Finnerty, who was out prospecting with a couple of mates. Their indignation that a lot of heathen "Chows" should be scooping up gold so easily, while they, Christians and legitimate miners, should be toiling over the barren ridges day after day without striking anything, was so great that for the moment, as they sat on their horses and viewed the swarming Chinese working their cradles on the bank of the creek, the power of speech deserted them....