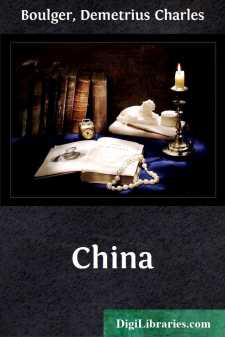 CHAPTER I THE EARLY AGES

The Chinese are unquestionably the oldest nation in the world, and their history goes back to a period to which no prudent historian will attempt to give a precise date. They speak the language and observe the same social and political customs that they did several thousand years before the Christian era, and they are the only living representatives to-day of a people and government which were contemporary with the Egyptians, the Assyrians, and the Jews. So far as our knowledge enables us to speak, the Chinese of the present age are in all essential points identical with those of the time of Confucius, and there is no reason to doubt that before his time the Chinese national character had been thoroughly formed in its present mold. The limits of the empire have varied from time to time under circumstances of triumph or disunion, but the Middle Kingdom, or China Proper, of the eighteen provinces has always possessed more or less of its existing proportions. Another striking and peculiar feature about China is the small amount of influence that the rest of the world has exercised upon it. In fact, it is only during the present century that that influence can be said to have existed at all. Up to that point China had pursued a course of her own, carrying on her own struggles within a definite limit, and completely indifferent to, and ignorant of, the ceaseless competition and contests of mankind outside her orbit, which make up the history of the rest of the Old World. The long struggles for supremacy in Western Asia between Assyrian, Babylonian and Persian, the triumphs of the Greek, followed by the absorption of what remained of the Macedonian conquests in the Empire of Rome, even the appearance of Islam and the Mohammedan conquerors, who changed the face of Southern Asia from the Ganges to the Levant, and long threatened to overrun Europe, had no significance for the people of China, and reacted as little on their destiny as if they had happened in another planet. Whatever advantages the Chinese may have derived from this isolation, it has entailed the penalty that the early history of their country is devoid of interest for the lest of the world, and it is only when the long independent courses of China and Europe are brought into proximity by the Mongol conquests, the efforts of the medieval travelers, the development of commerce, and the wars carried on for the purpose of obtaining a secure position for foreigners in China—four distinct phases covering the last seven centuries—that any confidence can be felt in successfully attracting notice to the affairs of China. Yet, as a curiosity in human existence, the earlier history of that country may justly receive some notice. Even though the details are not recited, the recollection of the antiquity of China's institutions must be ever present with the student, as affording an indispensable clew to the character of the Chinese people and the composition of their government.

The first Chinese are supposed to have been a nomad tribe in the province of Shensi, which lies in the northwest of China, and among them at last appeared a ruler, Fohi, whose name at least has been preserved....