Cecilia A Story of Modern Rome 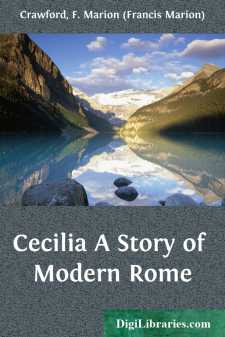 Two men were sitting side by side on a stone bench in the forgotten garden of the Arcadian Society, in Rome; and it was in early spring, not long ago. Few people, Romans or strangers, ever find their way to that lonely and beautiful spot beyond the Tiber, niched in a hollow of the Janiculum below San Pietro in Montorio, where Beatrice Cenci sleeps. The Arcadians were men and women who loved poetry in an artificial time, took names of shepherds and shepherdesses, rhymed as best they could, met in pleasant places to recite their verses, and played that the world was young, and gentle, and sweet, and unpoisoned, just when it had declined to one of its recurring periods of vicious old age. The Society did not die with its times, and it still exists, less sprightly, less ready to mask in pastorals, but rhyming, meeting, and reciting verses now and then, in the old manner, though rarely in the old haunts. Even now fresh inscriptions in honour of the Arcadians are set into the stuccoed walls of the little terraced garden under the hill.

It is very peaceful there. Above, the concave wall of the small house of meeting looks down upon circular tiers of brick seats, and beyond these there are bushes and a little fountain. To the right and left, symmetrical walks lead down in two wide curves to the lower levels, where the water falls again into a basin in a shaded grotto, and rises the third time in another fountain. An ancient stone-pine tree springs straight upwards, spreading out lovely branches. There are bushes again and a magnolia, and a Japanese medlar, and there is moss. The stone mouldings of the fountains are rich with the green tints of time. The air is softly damp, smelling of leaves and flowers; there are corners into which the sunlight never shines, little mysteries of perpetual shade that are full of sadness in winter, but in summer repeat the fanciful confidences of a delicious and imaginary past.

The Sister who had let in the two visitors had left them to themselves, and had gone back to the little convent door; for she was the portress, and therefore a small judge of character in her way, and she understood that the two gentlemen were not like the other half-dozen strangers who came every year to see the garden, and went away after ten minutes, dropping half a franc into her hand for the Sisters, and not even lifting their hats to her as she let them out. These two evidently knew the place; they spoke to each other as intimate friends do; they had come to enjoy the peace and silence for an hour, and they would neither carry off the flowers from the magnolia tree, as some did, nor scrawl their names in pencil on the stucco. Therefore they might safely be left to their own leisure and will.

The men were friends, as the portress had guessed; they were very unlike, and their unlikeness was in part the reason of their friendship. The one was squarely built, of average height, a man of action at every point, with bold blue eyes that could be piercing, a rugged Roman head, prominent at the brows, short reddish hair and pointed beard, great jaw and cheek-bones, a tanned and freckled skin. He sat leaning back, one leg crossed over the other, the knee that was upper-most pressing against the stout stick he held across it, and the big veins swelled on his hands and wrists. He was a sailor, and a born fighting man; and in ten years of service he had managed to find himself in every affair that had concerned Italy in the remotest degree, in Africa, in China, and elsewhere. He was now at home on leave, expecting immediate promotion. He bore a historical name; he was called Lamberto Lamberti.

His companion sat with folded arms and bent head, a rather dark young man with deep-set grey eyes that often looked black, a thoughtful face, a grave mouth that could smile suddenly and almost strangely, with a child's sweet frankness, and yet with a look that was tender and human—the smile of a man who understands the meaning of life and yet does not despise it. Most people would have taken him for a man of leisure, probably given to reading or the cultivation of some artistic taste....