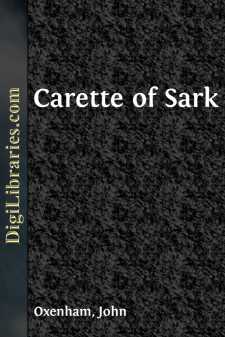 CHAPTER I HOW PAUL MARTEL FELL OUT WITH SERCQ

To give you a clear understanding of matters I must begin at the beginning and set things down in their proper order, though, as you will see, that was not by any means the way in which I myself came to learn them.

For my mother and my grandfather were not given to overmuch talk at the best of times, and all my boyish questionings concerning my father left me only the bare knowledge that, like many another Island man in those times—ay, and in all times—he had gone down to the sea and had never returned therefrom.

That was too common a thing to require any explanation, and it was not till long afterwards, when I was a grown man, and so many other strange things had happened that it was necessary, or at all events seemly, that I should know all about my father, that George Hamon, under the compulsion of a very strange and unexpected happening, told me all he knew of the matter.

This, then, that I tell you now is the picture wrought into my own mind by what I gathered from him and from others, regarding events which took place when I was close upon three years old.

And first, let me say that I hold myself a Sercq man born and bred, in spite of the fact that—well, you will come to that presently. And I count our little isle of Sercq the very fairest spot on earth, and in that I am not alone. The three years I spent on ships trading legitimately to the West Indies and Canada and the Mediterranean made me familiar with many notable places, but never have I seen one to equal this little pearl of all islands.

You will say that, being a Sercq man, that is quite how I ought to feel about my own Island. And that is true, but, apart from the fact that I have lived there the greater part of my life, and loved there, and suffered there, and enjoyed there greater happiness than comes to all men, and that therefore Sercq is to me what no other land ever could be,—apart from all that, I hold, and always shall hold, that in the matter of natural beauty, visible to all seeing eyes, our little Island holds her own against the world.

My grandfather, who had voyaged even more widely than myself, always said the same, and he was not a man given to windy talk, nor, indeed, as I have said, to overmuch talk of any kind.

And for the opening of my eyes to the rare delight and full enjoyment of the simple things of Nature, just as God has fashioned them with His wonderful tools, the wind, the wave, and the weather, I have to thank my mother, Rachel Carré, and my grandfather, Philip Carré,—for that and very much more.

It has occurred to me at times, when I have been thinking over their lives as I knew them,—the solitariness, the quietness, the seeming grayness and dead levelness of them,—that possibly their enjoyment and apprehension of the beauty of all things about them, the small things as well as the great, were given to them to make up, as it were, for the loss of other things, which, however, they did not seem to miss, and I am quite sure would not have greatly valued. If they had been richer, more in the world,—busier they hardly could have been, for the farm was but a small one and not very profitable, and had to be helped by the fishing,—perhaps they might not have found time to see and understand and enjoy those simpler, larger matters. But some may look upon that as mere foolishness, and may quote against me M. La Fontaine's fable about the fox and the grapes. I do not mind. Their grapes ripened and were gathered, and mine are in the ripening.

Sercq, in the distance, looks like a great whale basking on the surface of the sea and nuzzling its young. That is a feature very common to our Islands; for time, and the weather, and the ever-restless sea wear through the softer veins, which run through all our Island rocks, just as unexpected streaks of tenderness may be found in the rough natures of our Island men. And so, from every outstanding point, great pieces become detached and form separate islets, between which and the parent isles the currents run like mill-races and take toll of the unwary and the stranger....