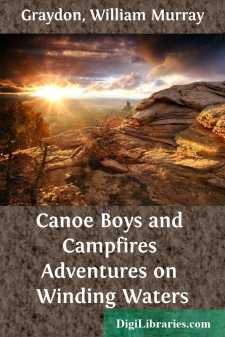 CHAPTER I INTRODUCING THE BOYS

"I say, Ned, this is beginning to grow wearisome," drawled Randy Moore as he tipped his chair against the wall, and crossed his feet on the low railing in front of him. "Clay promised to be here half an hour ago," he went on in an injured tone, "and if he doesn't come in a few minutes I'm going to have a spin on the river. It's aggravating to sit here and do nothing. I can count a dozen boats between the railroad bridge and Bushy Island."

"I wouldn't mind being out myself," said Ned Chapman, "but we have important business to transact to-night, Randy, and I think it would be wiser to let boating go for once. I have everything planned out in ship shape fashion, and it only wants the seal of approval from you and Clayton."

"Oh! you have, have you?" exclaimed Randy with a sudden show of interest. "That's good news, Ned. If Clay knew the momentous question was to be settled at last, he would stir himself to get here, wherever he is. I'll give him ten minutes' grace."

"You'll give him as many minutes as he needs," rejoined Ned. "There must be some reason for his delay. It's new for him to be late. He's always the first to keep an engagement."

"We'll know when he comes," said Randy wisely. "Stop talking now. I want to count the boats. I never saw so many on the river before."

The two boys were sitting on a narrow balcony that projected from the second floor of a neat but unpretentious boathouse. The rear end of the edifice was built against the sloping base of the river bank.

From the park above a flight of steps, with a single hand rail, led down to the main entrance, which was on the second floor. The other end of the apartment opened on the balcony and faced the Susquehanna river.

From the lower floor, which held a number of boats and canoes, a plank walk sloped to the water's edge, ten or fifteen yards away.

Randy Moore was the fortunate owner of this snug little piece of property. The Harrisburg boys envied him his gun, his dog and his pony, but they would have fairly bowed down before him if by so doing they could have been put on the list of those favored ones who made free and daily use of the boathouse.

A "luck fellow" was the general verdict concerning Randy, and it was a true one. His father was wealthy and never refused to gratify any reasonable desire of his only son. In consequence Randy was somewhat spoiled and self willed, but in other ways he was really a sensible lad.

The fact of his own superior position in life never occurred to him in relation to his companions. He gave himself no airs, and expected no homage or adulation.

His chief fault was a strong and uncurbed will, and he unfortunately had a quick temper. He was just sixteen years old, and was strong and hardy. He had dark eyes and hair, and a pleasing, attractive face.

Randy's most intimate friend, Ned Chapman, differed from him in every respect, and made an admirable foil for the other's impetuous temperament. Ned's father was a merchant in moderate circumstances, and he had just reason to be proud of his son's bringing up....