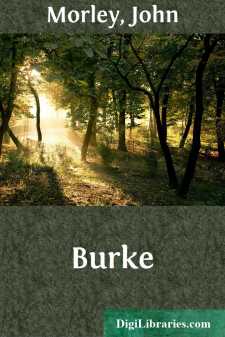 It will soon be a hundred and twenty years since Burke first took his seat, in the House of Commons, and it is eighty-five years since his voice ceased to be heard there. Since his death, as during his life, opinion as to the place to which he is entitled among the eminent men of his country has touched every extreme. Tories have extolled him as the saviour of Europe. Whigs have detested him as the destroyer of his party. One undiscriminating panegyrist calls him the most profound and comprehensive of political philosophers that has yet existed in the world. Another and more distinguished writer insists that he is a resplendent and far-seeing rhetorician, rather than a deep and subtle thinker. A third tells us that his works cannot be too much our study, if we mean either to understand or to maintain against its various enemies, open and concealed, designing and mistaken, the singular constitution of this fortunate island. A fourth, on the contrary, declares that it would be hard to find a single leading principle or prevailing sentiment in one half of these works, to which something extremely adverse cannot be found in the other half. A fifth calls him one of the greatest men, and, Bacon alone excepted, the greatest thinker, who ever devoted himself to the practice of English politics. Yet, oddly enough, the author of the fifth verdict will have it that this great man and great thinker was actually out of his mind when he composed the pieces for which he has been most widely admired and revered.

A sufficient interval has now passed to allow all the sediment of party fanaticism to fall to the bottom. The circumstances of the world have since Burke's time undergone variation enough to enable us to judge, from many points of view, how far he was the splendid pamphleteer of a faction, and how far he was a contributor to the universal stock of enduring wisdom. Opinion is slowly, but without reaction, settling down to the verdict that Burke is one of the abiding names in our history, not because he either saved Europe or destroyed the Whig party; but because he added to the permanent considerations of wise political thought, and to the maxims of wise practice in great affairs, and because he imprints himself upon us with a magnificence and elevation of expression that places him among the highest masters of literature, in one of its highest and most commanding senses. Those who have acquired a love for abstract politics amid the almost mathematical closeness and precision of Hobbes, the philosophic calm of Locke or Mill, or even the majestic and solemn fervour of Milton, are revolted by the unrestrained passion and the decorated style of Burke. His passion appears hopelessly fatal to success in the pursuit of Truth, who does not usually reveal herself to followers thus inflamed. His ornate style appears fatal to the cautious and precise method of statement, suitable to matter which is not known at all unless it is known distinctly....