Brave Men and Women Their Struggles, Failures, And Triumphs 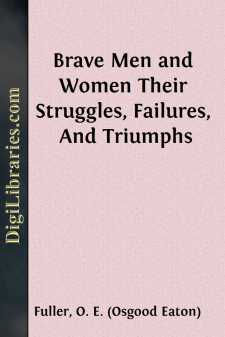 I. BENJAMIN FRANKLIN. (BORN 1706--DIED 1790.) HIS FAME STILL CLIMBING TO HEAVEN--WHAT HE HAD DONE AT FIFTY-TWO--POOR RICHARD'S ADDRESS.

The late Judge Black was remarkable not only for his wit and humor, which often enlivened the dry logic of law and fact, but also for flashes of unique eloquence. In presenting a certain brief before the United States Supreme Court he had occasion to animadvert upon some of our great men. Among other things he said, as related to the writer by one who heard him: "The colossal name of Washington is growing year by year, and the fame of Franklin is still climbing to heaven," accompanying the latter words by such a movement of his right hand that not one of his hearers failed to see the immortal kite quietly bearing the philosopher's question to the clouds. It was a point which delivered the answer. In the life of every great man there is likewise a point which delivers the special message which he was born to publish to the world. Biography is greatly simplified when it confines itself chiefly to that one point. What does the reader, who has his own work to do, care for a great multitude of details which are not needed for the setting of the picture? To the point is the cry of our busy life.

Benjamin Franklin is here introduced to the reader

What had he done at that age to command more than ordinary respect and admiration?

I. Born in poverty and obscurity, in which he passed his early years; with no advantages of education in the schools of his day, after he entered his teens; under the condition of daily toil for his bread; he had carried on, in spite of all obstacles, the process of self-education through books and observation, and become in literature and science, as well as in the practical affairs of every-day life, the best informed man in America.

II. Apprenticed to a printer in his native Boston, at thirteen; a journeyman in Philadelphia at seventeen; working at the case in London at nineteen; back to the Quaker City, and set up for himself at twenty-six; he had long since mastered all the details of a great business, prepared to put his hand to any thing, from the trundling of paper through the streets on a wheel-barrow to the writing of editorials and pamphlets, and had earned for himself a position as the most prosperous printer and publisher in the colonies.

III. Retired from active business at forty-six, considering that he had already earned and saved enough to supply his reasonable wants for the rest of his life; fired with ambition to do something for the advancement of science; he had now for six years given himself to philosophical investigation and experiment, among other things demonstrated the identity of electricity as produced by artificial means and atmospheric lightning, and made himself a name throughout the civilized world.

IV. Besides, it must not be forgotten that he had all along been foremost in many a work for the public good. The Franklin Library, of Philadelphia, owes to him its origin. The University of Pennsylvania grew out of an educational project in which he was a prime mover. And his ideas as to the relative importance of ancient and modern classics were more than a hundred years in advance of his times.

Such is a glimpse of Franklin at fifty-two, as preliminary to a single episode which will occupy the rest of this chapter. But the episode itself requires a special word.

V. For a quarter of a century Franklin had published an almanac under the pseudonym of Richard Saunders, into the pages of which he crowded year by year choice scraps of wit and wisdom, which made the little hand-book a welcome visitor in almost every home of the New World. Now in the midst of those philosophical studies which so much delighted him, when about to cross the Atlantic as a commissioner to the Home Government, he found time to gather up the maxims and quaint sayings of twenty-five years and set them in a wonderful mosaic, as the preface of Poor Richard's world-famous almanac--as unique a piece of writing as any language affords. Here it is: