Bouvard and Pecuchet A Tragi-comic Novel of Bourgeois Life 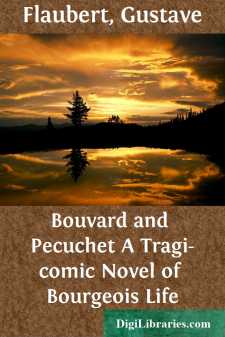 As there were thirty-three degrees of heat the Boulevard Bourdon was absolutely deserted.

Farther down, the Canal St. Martin, confined by two locks, showed in a straight line its water black as ink. In the middle of it was a boat, filled with timber, and on the bank were two rows of casks.

Beyond the canal, between the houses which separated the timber-yards, the great pure sky was cut up into plates of ultramarine; and under the reverberating light of the sun, the white façades, the slate roofs, and the granite wharves glowed dazzlingly. In the distance arose a confused noise in the warm atmosphere; and the idleness of Sunday, as well as the melancholy engendered by the summer heat, seemed to shed around a universal languor.

Two men made their appearance.

One came from the direction of the Bastille; the other from that of the Jardin des Plantes. The taller of the pair, arrayed in linen cloth, walked with his hat back, his waistcoat unbuttoned, and his cravat in his hand. The smaller, whose form was covered with a maroon frock-coat, wore a cap with a pointed peak.

As soon as they reached the middle of the boulevard, they sat down, at the same moment, on the same seat.

In order to wipe their foreheads they took off their headgear, each placing his beside himself; and the little man saw "Bouvard" written in his neighbour's hat, while the latter easily traced "Pécuchet" in the cap of the person who wore the frock-coat.

"Look here!" he said; "we have both had the same idea—to write our names in our head-coverings!"

"Yes, faith, for they might carry off mine from my desk."

Then they gazed at each other. Bouvard's agreeable visage quite charmed Pécuchet.

His blue eyes, always half-closed, smiled in his fresh-coloured face. His trousers, with big flaps, which creased at the end over beaver shoes, took the shape of his stomach, and made his shirt bulge out at the waist; and his fair hair, which of its own accord grew in tiny curls, gave him a somewhat childish look.

He kept whistling continually with the tips of his lips.

Bouvard was struck by the serious air of Pécuchet. One would have thought that he wore a wig, so flat and black were the locks which adorned his high skull. His face seemed entirely in profile, on account of his nose, which descended very low. His legs, confined in tight wrappings of lasting, were entirely out of proportion with the length of his bust. His voice was loud and hollow.

This exclamation escaped him:

"How pleasant it would be in the country!"

But, according to Bouvard, the suburbs were unendurable on account of the noise of the public-houses outside the city. Pécuchet was of the same opinion. Nevertheless, he was beginning to feel tired of the capital, and so was Bouvard.

And their eyes wandered over heaps of stones for building, over the hideous water in which a truss of straw was floating, over a factory chimney rising towards the horizon. Sewers sent forth their poisonous exhalations....