Books and Habits from the Lectures of Lafcadio Hearn 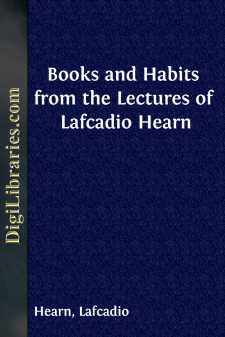 These chapters, for the most part, are reprinted from Lafcadio Hearn’s “Interpretations of Literature,” 1915, from his “Life and Literature,” 1916, and from his “Appreciations of Poetry,” 1917. Three chapters appear here for the first time. They are all taken from the student notes of Hearn’s lectures at the University of Tokyo, 1896-1902, sufficiently described in the earlier volumes just mentioned. They are now published in this regrouping in response to a demand for a further selection of the lectures, in a less expensive volume and with emphasis upon those papers which illustrate Hearn’s extraordinary ability to interpret the exotic in life and in books.

It should be remembered that these lectures were delivered to Japanese students, and that Hearn’s purpose was not only to impart the information about Western literature usually to be found in our histories and text-books, but much more to explain to the Oriental mind those peculiarities of our civilization which might be hard to understand on the further side of the Pacific Ocean. The lectures are therefore unique, in that they are the first large attempt by a Western critic to interpret us to the East. That we shall be deeply concerned in the near future to continue this interpretation on an even larger scale, no one of us doubts. We wish we might hope for another genius like Hearn to carry on the work.

The merit of the chapters printed or reprinted in the present volume seems to me their power to teach us to imagine our familiar traditions as foreign and exotic in the eyes of other peoples. We are accustomed, like every one else, to think of our literature as the final product of other literatures—as a terminal in itself, rather than as a channel through which great potentialities might flow. Like other men, we are accustomed to think of ourselves as native, under all circumstances, and of other people at all times as foreign. While we were staying in their country, did we not think of the French as foreigners? In these chapters, not originally intended for us, we have the piquant and salutary experience of seeing what we look like on at least one occasion when we are the foreigners; we catch at least a glimpse of what to the Orient seems exotic in us, and it does us no harm to observe that the peculiarly Western aspects of our culture are not self-justifying nor always justifiable when looked at through eyes not already disposed in their favour. Hearn was one of the most loyal advocates the West could possibly have sent to the East, but he was an honest artist, and he never tried to improve his case by trimming a fact. His interpretation of us, therefore, touches our sensitiveness in regions—and in a degree—which perhaps his Japanese students were unconscious of; we too marvel as well as they at his skill in explaining, but we are sensitive to what he found necessary to explain. We read less for the explanation than for the inventory of ourselves....