Biographical Stories (From: "True Stories of History and Biography") 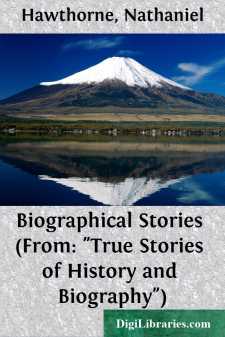 When Edward Temple was about eight or nine years old he was afflicted with a disorder of the eyes. It was so severe, and his sight was naturally so delicate, that the surgeon felt some apprehensions lest the boy should become totally blind. He therefore gave strict directions to keep him in a darkened chamber, with a bandage over his eyes. Not a ray of the blessed light of heaven could be suffered to visit the poor lad.

This was a sad thing for Edward. It was just the same as if there were to be no more sunshine, nor moonlight, nor glow of the cheerful fire, nor light of lamps. A night had begun which was to continue perhaps for months,—a longer and drearier night than that which voyagers are compelled to endure when their ship is icebound, throughout the winter, in the Arctic Ocean. His dear father and mother, his brother George, and the sweet face of little Emily Robinson must all vanish and leave him in utter darkness and solitude. Their voices and footsteps, it is true, would be heard around him; he would feel his mother's embrace and the kind pressure of all their hands; but still it would seem as if they were a thousand miles away.

And then his studies,—they were to be entirely given up. This was another grievous trial; for Edward's memory hardly went back to the period when he had not known how to read. Many and many a holiday had he spent at his hook, poring over its pages until the deepening twilight confused the print and made all the letters run into long words. Then, would he press his hands across his eyes and wonder why they pained him so; and when the candles were lighted, what was the reason that they burned so dimly, like the moon in a foggy night? Poor little fellow! So far as his eyes were concerned he was already an old man, and needed a pair of spectacles almost as much as his own grandfather did.

And now, alas! the time was come when even grandfather's spectacles could not have assisted Edward to read. After a few bitter tears, which only pained his eyes the more, the poor boy submitted to the surgeon's orders. His eyes were bandaged, and, with his mother on one side and his little friend Emily on the other, he was led into a darkened chamber.

"Mother, I shall be very miserable!" said Edward, sobbing.

"O no, my dear child!" replied his mother, cheerfully. "Your eyesight was a precious gift of Heaven, it is true; but you would do wrong to be miserable for its loss, even if there were no hope of regaining it. There are other enjoyments besides what come to us through our eyes."

"None that are worth having," said Edward.

"Ah, but you will not think so long," rejoined Mrs. Temple, with tenderness. "All of us—your father, and myself, and George, and our sweet Emily—will try to find occupation and amusement for you. We will use all our eyes to make you happy. Will they not be better than a single pair?"

"I will sit, by you all day long," said Emily, in her low, sweet voice, putting her hand into that of Edward.

"And so will I, Ned," said George, his elder brother, "school time and all, if my father will permit me."

Edward's brother George was three or four years older than himself,—a fine, hardy lad, of a bold and ardent temper....