Beyond The Rocks A Love Story 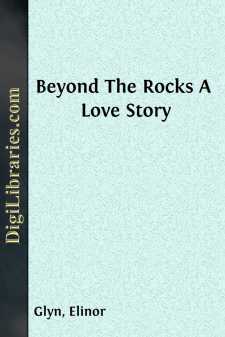 The hours were composed mostly of dull or rebellious moments during the period of Theodora's engagement to Mr. Brown. From the very first she had thought it hard that she should have had to take this situation, instead of Sarah or Clementine, her elder step-sisters, so much nearer his age than herself. To do them justice, either of these ladies would have been glad to relieve her of the obligation to become Mrs. Brown, but Mr. Brown thought otherwise.

A young and beautiful wife was what he bargained for.

To enter a family composed of three girls—two of the first family, one almost thirty and a second very plain—a father with a habit of accumulating debts and obliged to live at Bruges and inexpensive foreign sea-side towns, required a strong motive; and this Josiah Brown found in the deliciously rounded, white velvet cheek of Theodora, the third daughter, to say nothing of her slender grace, the grace of a young fawn, and a pair of gentian-blue eyes that said things to people in the first glance.

Poor, foolish, handsome Dominic Fitzgerald, light-hearted, débonair Irish gentleman, gay and gallant on his miserable pension of a broken and retired Guardsman, had had just sufficient sense to insist upon magnificent settlements, certainly prompted thereto by Clementine, who inherited the hard-headedness of the early defunct Scotch mother, as well as her high cheek-bones. That affair had been a youthful mésalliance.

"You had better see we all gain something by it, papa," she had said. "Make the old bore give Theodora a huge allowance, and have it all fixed and settled by law beforehand. She is such a fool about money—just like you—she will shower it upon us; and you make him pay you a sum down as well."

Captain Fitzgerald fortunately consulted an honest solicitor, and so things were arranged to the satisfaction of all parties concerned except Theodora herself, who found the whole affair far from her taste.

That one must marry a rich man if one got the chance, to help poor, darling papa, had always been part of her creed, more or less inspired by papa himself. But when it came to the scratch, and Josiah Brown was offered as a husband, Theodora had had to use every bit of her nerve and self-control to prevent herself from refusing.

She had not seen many men in her nineteen years of out-at-elbows life, but she had imagination, and the one or two peeps at smart old friends of papa's, landed from stray yachts now and then, at out-of-the-way French watering-places, had given her an ideal far, far removed from the personality of Josiah Brown.

But, as Sarah explained to her, such men could never be husbands. They might be lovers, if one was fortunate enough to move in their sphere, but husbands—never! and there was no use Theodora protesting this violent devotion to darling papa, if she could not do a small thing like marrying Josiah Brown for him!

Theodora's beautiful mother, dead in the first year of her runaway marriage, had been the daughter of a stiff-necked, unforgiving old earl; she had bequeathed her child, besides these gentian eyes and wonderful, silvery blond hair, a warm, generous heart and a more or less romantic temperament....