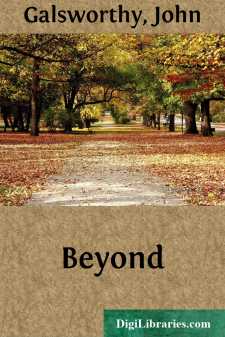 At the door of St. George's registry office, Charles Clare Winton strolled forward in the wake of the taxi-cab that was bearing his daughter away with "the fiddler fellow" she had married. His sense of decorum forbade his walking with Nurse Betty—the only other witness of the wedding. A stout woman in a highly emotional condition would have been an incongruous companion to his slim, upright figure, moving with just that unexaggerated swing and balance becoming to a lancer of the old school, even if he has been on the retired list for sixteen years.

Poor Betty! He thought of her with irritated sympathy—she need not have given way to tears on the door-step. She might well feel lost now Gyp was gone, but not so lost as himself! His pale-gloved hand—the one real hand he had, for his right hand had been amputated at the wrist—twisted vexedly at the small, grizzling moustache lifting itself from the corners of his firm lips. On this grey February day he wore no overcoat; faithful to the absolute, almost shamefaced quietness of that wedding, he had not even donned black coat and silk hat, but wore a blue suit and a hard black felt. The instinct of a soldier and hunting man to exhibit no sign whatever of emotion did not desert him this dark day of his life; but his grey-hazel eyes kept contracting, staring fiercely, contracting again; and, at moments, as if overpowered by some deep feeling, they darkened and seemed to draw back in his head. His face was narrow and weathered and thin-cheeked, with a clean-cut jaw, small ears, hair darker than the moustache, but touched at the side wings with grey—the face of a man of action, self-reliant, resourceful. And his bearing was that of one who has always been a bit of a dandy, and paid attention to "form," yet been conscious sometimes that there were things beyond. A man, who, preserving all the precision of a type, yet had in him a streak of something that was not typical. Such often have tragedy in their pasts.

Making his way towards the park, he turned into Mount Street. There was the house still, though the street had been very different then—the house he had passed, up and down, up and down in the fog, like a ghost, that November afternoon, like a cast-out dog, in such awful, unutterable agony of mind, twenty-three years ago, when Gyp was born. And then to be told at the door—he, with no right to enter, he, loving as he believed man never loved woman—to be told at the door that SHE was dead—dead in bearing what he and she alone knew was their child! Up and down in the fog, hour after hour, knowing her time was upon her; and at last to be told that! Of all fates that befall man, surely the most awful is to love too much.

Queer that his route should take him past the very house to-day, after this new bereavement! Accursed luck—that gout which had sent him to Wiesbaden, last September! Accursed luck that Gyp had ever set eyes on this fellow Fiorsen, with his fatal fiddle! Certainly not since Gyp had come to live with him, fifteen years ago, had he felt so forlorn and fit for nothing....