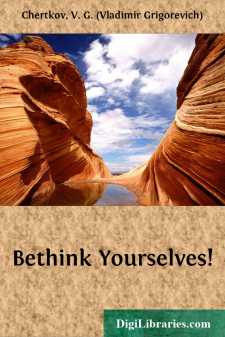 Again war. Again sufferings, necessary to nobody, utterly uncalled for; again fraud; again the universal stupefaction and brutalization of men.

Men who are separated from each other by thousands of miles, hundreds of thousands of such men (on the one hand—Buddhists, whose law forbids the killing, not only of men, but of animals; on the other hand—Christians, professing the law of brotherhood and love) like wild beasts on land and on sea are seeking out each other, in order to kill, torture, and mutilate each other in the most cruel way. What can this be? Is it a dream or a reality? Something is taking place which should not, cannot be; one longs to believe that it is a dream and to awake from it. But no, it is not a dream, it is a dreadful reality!

One could yet understand how a poor, uneducated, defrauded Japanese, torn from his field and taught that Buddhism consists not in compassion to all that lives, but in sacrifices to idols, and how a similar poor illiterate fellow from the neighborhood of Toula or Nijni Novgorod, who has been taught that Christianity consists in worshipping Christ, the Madonna, Saints, and their ikons—one could understand how these unfortunate men, brought by the violence and deceit of centuries to recognize the greatest crime in the world—the murder of one's brethren—as a virtuous act, can commit these dreadful deeds, without regarding themselves as being guilty in so doing.

But how can so-called enlightened men preach war, support it, participate in it, and, worst of all, without suffering the dangers of war themselves, incite others to it, sending their unfortunate defrauded brothers to fight? These so-called enlightened men cannot possibly ignore, I do not say the Christian law, if they recognize themselves to be Christians, but all that has been written, is being written, has and is being said, about the cruelty, futility, and senselessness of war. They are regarded as enlightened men precisely because they know all this. The majority of them have themselves written and spoken about this. Not to mention The Hague Conference, which called forth universal praise, or all the books, pamphlets, newspaper articles, and speeches demonstrating the possibility of the solution of international misunderstandings by international arbitration—no enlightened man can help knowing that the universal competition in the armaments of States must inevitably lead them to endless wars, or to a general bankruptcy, or to both the one and the other. They cannot but know that besides the senseless, purposeless expenditure of milliards of roubles, i.e. of human labor, on the preparations for war, during the wars themselves millions of the most energetic and vigorous men perish in that period of their life which is best for productive labor (during the past century wars have destroyed fourteen million men). Enlightened men cannot but know that occasions for war are always such as are not worth not only one human life, but not one hundredth part of all that which is spent upon wars (in fighting for the emancipation of the negroes much more was spent than it would have cost to redeem them from slavery).

Every one knows and cannot help knowing that, above all, wars, calling forth the lowest animal passions, deprave and brutalize men....