Beneath an Umbrella (From "Twice Told Tales") 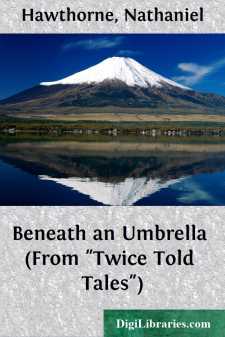 Pleasant is a rainy winter's day, within doors! The best study for such a day, or the best amusement,—call it which you will,—is a book of travels, describing scenes the most unlike that sombre one, which is mistily presented through the windows. I have experienced, that fancy is then most successful in imparting distinct shapes and vivid colors to the objects which the author has spread upon his page, and that his words become magic spells to summon up a thousand varied pictures. Strange landscapes glimmer through the familiar walls of the room, and outlandish figures thrust themselves almost within the sacred precincts of the hearth. Small as my chamber is, it has space enough to contain the ocean-like circumference of an Arabian desert, its parched sands tracked by the long line of a caravan, with the camels patiently journeying through the heavy sunshine. Though my ceiling be not lofty, yet I can pile up the mountains of Central Asia beneath it, till their summits shine far above the clouds of the middle atmosphere. And, with my humble means, a wealth that is not taxable, I can transport hither the magnificent merchandise of an Oriental bazaar, and call a crowd of purchasers from distant countries, to pay a fair profit for the precious articles which are displayed on all sides. True it is, however, that amid the bustle of traffic, or whatever else may seem to be going on around me, the rain-drops will occasionally be heard to patter against my window-panes, which look forth upon one of the quietest streets in a New England town. After a time, too, the visions vanish, and will not appear again at my bidding. Then, it being nightfall, a gloomy sense of unreality depresses my spirits, and impels me to venture out, before the clock shall strike bedtime, to satisfy myself that the world is not entirely made up of such shadowy materials, as have busied me throughout the day. A dreamer may dwell so long among fantasies, that the things without him will seem as unreal as those within.

When eve has fairly set in, therefore, I sally forth, tightly buttoning my shaggy overcoat, and hoisting my umbrella, the silken dome of which immediately resounds with the heavy drumming of the invisible rain-drops. Pausing on the lowest doorstep, I contrast the warmth and cheerfulness of my deserted fireside with the drear obscurity and chill discomfort into which I am about to plunge. Now come fearful auguries, innumerable as the drops of rain. Did not my manhood cry shame upon me, I should turn back within doors, resume my elbow-chair, my slippers, and my book, pass such an evening of sluggish enjoyment as the day has been, and go to bed inglorious. The same shivering reluctance, no doubt, has quelled, for a moment, the adventurous spirit of many a traveller, when his feet, which were destined to measure the earth around, were leaving their last tracks in the home-paths.

In my own case, poor human nature may be allowed a few misgivings. I look upward, and discern no sky, not even an unfathomable void, but only a black, impenetrable nothingness, as though heaven and all its lights were blotted from the system of the universe. It is as if nature were dead, and the world had put on black, and the clouds were weeping for her. With their tears upon my cheek, I turn my eyes earthward, but find little consolation here below. A lamp is burning dimly at the distant corner, and throws just enough of light along the street, to show, and exaggerate by so faintly showing, the perils and difficulties which beset my path. Yonder dingily white remnant of a huge snow-bank,—which will yet cumber the sidewalk till the latter days of March,—over or through that wintry waste must I stride onward. Beyond, lies a certain Slough of Despond, a concoction of mud and liquid filth, ankle-deep, leg-deep, neck-deep,—in a word, of unknown bottom, on which the lamplight does not even glimmer, but which I have occasionally watched, in the gradual growth of its horrors, from morn till nightfall. Should I flounder into its depths, farewell to upper earth! And hark! how roughly resounds the roaring of a stream, the turbulent career of which is partially reddened by the gleam of the lamp, but elsewhere brawls noisily through the densest gloom. O, should I be swept away in fording that impetuous and unclean torrent, the coroner will have a job with an unfortunate gentleman, who would fain end his troubles anywhere but in a mud-puddle!

Pshaw! I will linger not another instant at arm's length from these dim terrors, which grow more obscurely formidable, the longer I delay to grapple with them. Now for the onset! And to! with little damage, save a dash of rain in the fact and breast, a splash of mud high up the pantaloons, and the left boot full of ice-cold water, behold me at the corner of the street. The lamp throws down a circle of red light around me; and twinkling onward from corner to corner, I discern other beacons marshalling my way to a brighter scene. But this is alone some and dreary spot....