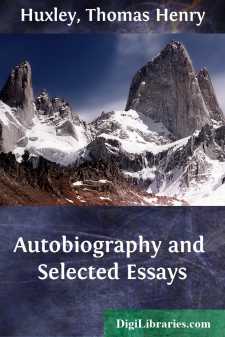 I — THE LIFE OF HUXLEY

Of Huxley's life and of the forces which moulded his thought, the Autobiography gives some account; but many facts which are significant are slighted, and necessarily the later events of his life are omitted. To supplement the story as given by him is the purpose of this sketch. The facts for this account are gathered entirely from the Life and Letters of Thomas Henry Huxley, by his son. For a real acquaintance with Huxley, the student should consult this source for himself; he will count the reading of the Life and Letters among the rare pleasures which have come to him through books.

Thomas Henry Huxley was born on May 4, 1825. His autobiography gives a full account of his parents, his early boyhood, and his education. Of formal education, Huxley had little; but he had the richer schooling which nature and life give an eager mind. He read widely; he talked often with older people; he was always investigating the why of things. He kept a journal in which he noted thoughts gathered from books, and ideas on the causes of certain phenomena. In this journal he frequently wrote what he had done and had set himself to do in the way of increasing his knowledge. Self-conducted, also, was his later education at the Charing Cross Hospital. Here, like Stevenson in his university days, Huxley seemed to be idle, but in reality, he was always busy on his own private end. So constantly did he work over the microscope that the window at which he sat came to be dubbed by his fellow students "The Sign of the Head and Microscope." Moreover, in his regular courses at Charing Cross, he seems to have done work sufficiently notable to be recognized by several prizes and a gold medal.

Of his life after the completion of his medical course, of his search for work, of his appointment as assistant surgeon on board the Rattlesnake, and of his scientific work during the four years' cruise, Huxley gives a vivid description in the autobiography. As a result of his investigations on this voyage, he published various essays which quickly secured for him a position in the scientific world as a naturalist of the first rank. A testimony of the value of this work was his election to membership in the Royal Society.

Although Huxley had now, at the age of twenty-six, won distinction in science, he soon discovered that it was not so easy to earn bread thereby. Nevertheless, to earn a living was most important if he were to accomplish the two objects which he had in view. He wished, in the first place, to marry Miss Henrietta Heathorn of Sydney, to whom he had become engaged when on the cruise with the Rattlesnake; his second object was to follow science as a profession. The struggle to find something connected with science which would pay was long and bitter; and only a resolute determination to win kept Huxley from abandoning it altogether. Uniform ill-luck met him everywhere. He has told in his autobiography of his troubles with the Admiralty in the endeavor to get his papers published, and of his failure there....