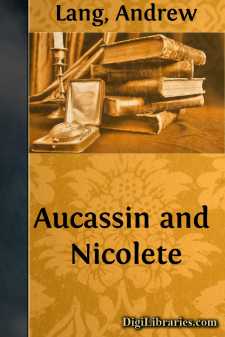 There is nothing in artistic poetry quite akin to “Aucassin and Nicolete.”

By a rare piece of good fortune the one manuscript of the Song-Story has escaped those waves of time, which have wrecked the bark of Menander, and left of Sappho but a few floating fragments.  The very form of the tale is peculiar; we have nothing else from the twelfth or thirteenth century in the alternate prose and verse of the cante-fable.   We have fabliaux in verse, and prose Arthurian romances.  We have Chansons de Geste, heroic poems like “Roland,” unrhymed assonant laisses, but we have not the alternations of prose with laisses in seven-syllabled lines.  It cannot be certainly known whether the form of “Aucassin and Nicolete” was a familiar form—used by many jogleors, or wandering minstrels and story-tellers such as Nicolete, in the tale, feigned herself to be,—or whether this is a solitary experiment by “the old captive” its author, a contemporary, as M. Gaston Paris thinks him, of Louis VII (1130).  He was original enough to have invented, or adopted from popular tradition, a form for himself; his originality declares itself everywhere in his one surviving masterpiece.  True, he uses certain traditional formulae, that have survived in his time, as they survived in Homer’s, from the manner of purely popular poetry, of Volkslieder.  Thus he repeats snatches of conversation always in the same, or very nearly the same words.  He has a stereotyped form, like Homer, for saying that one person addressed another, “ains traist au visconte de la vile si l’apela” τον δαπαyειβομενος προσεφε . . . Like Homer, and like popular song, he deals in recurrent epithets, and changeless courtesies.  To Aucassin the hideous plough-man is “Biax frère,” “fair brother,” just as the treacherous Aegisthus is αμυμων in Homer; these are complimentary terms, with no moral sense in particular.  The jogleor is not more curious than Homer, or than the poets of the old ballads, about giving novel descriptions of his characters.  As Homer’s ladies are “fair-tressed,” so Nicolete and Aucassin have, each of them, close yellow curls, eyes of vair (whatever that may mean), and red lips.  War cannot be mentioned except as war “where knights do smite and are smitten,” and so forth.  The author is absolutely conventional in such matters, according to the convention of his age and profession.

Nor is his matter more original.  He tells a story of thwarted and finally fortunate love, and his hero is “a Christened knight”—like Tamlane,—his heroine a Paynim lady.  To be sure, Nicolete was baptized before the tale begins, and it is she who is a captive among Christians, not her lover, as usual, who is a captive among Saracens.  The author has reversed the common arrangement, and he appears to have cared little more than his reckless hero, about creeds and differences of faith.  He is not much interested in the recognition of Nicolete by her great Paynim kindred, nor indeed in any of the “business” of the narrative, the fighting, the storms and tempests, and the burlesque of the kingdom of Torelore....