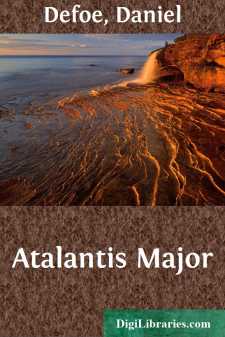 Atalantis Major is a thinly veiled allegory describing the November 1710 election of the representative Scottish peers. The circumstances which surrounded this election were produced by the outcome of the previous month's General Election—a landslide for the Tories—and, to understand these circumstances, the impact of that Tory victory must be seen within the context of the political events of 1710.

By early in 1710 it had become obvious that the Whig Ministry of Sidney Godolphin was unable or unwilling to negotiate an end to the long, expensive, and consequently, unpopular war with France. The quarrel between Queen Anne and her confidante, the Duchess of Marlborough, smouldered until, on 6 April 1710, the breach between them became final. The Queen's confidence in the Duke of Marlborough began to erode as early as May 1709 when he sought to be appointed "Captain-General for Life." Godolphin's decision to impeach the popular Rev. Dr. Henry Sacheverell for preaching "a sermon which reasserted the doctrine of non-resistance to the will of the monarch" was ill-advised, for not only did it give the High-Church Tories a martyr, it also gave the Administration the appearance of being against the Church. In securing the impeachment of Sacheverell on 20 March 1710, the Whigs discovered that they had lost the support and the confidence of both the Parliament and the country.

Dissention within and intrigue from without further hastened the fall of the Administration. Godolphin, a moderate, had, after the General Election of 1708, found himself allied with the "Junto" of five powerful Whig Lords—Wharton, Sommers, Halifax, Orford, and Sunderland—but it was, at best, an uneasy alliance. Throughout 1709 and into the early months of 1710, personal jealousies drove the Godolphin-Marlborough interest farther and farther away from the Junto. Robert Harley and the Dukes of Somerset and Shrewsbury, in their determination to overthrow the Administration, exploited every chance to widen the rifts between Anne and her Ministers and between the two ministerial factions. Abigail Hill Masham, who soon became an agent of Harley, replaced the Duchess of Marlborough as Anne's confidante.

When the Ministry fell, it fell like a house of cards. On 14 April 1710 Shrewsbury was made Lord Chamberlain over the unavailing protests of Godolphin. Two months later, at the instigation of Somerset, the Queen replaced Sunderland with the Tory Lord Dartmouth as Secretary of State. Finally, on 8 August, Godolphin was ordered to break the White Staff of his office and Harley was appointed Treasurer. One by one the remaining Junto Ministers were replaced by Tories. By September the work was complete. The Duke of Marlborough alone remained, in command of the army, but this was only to be until the new Ministry could negotiate a peace and his services would no longer be required.

It had been Harley's intention to govern by means of a "moderate" Administration, a "Queen's Ministery above party," but he had not reckoned on the outcome of the General Election called in October....