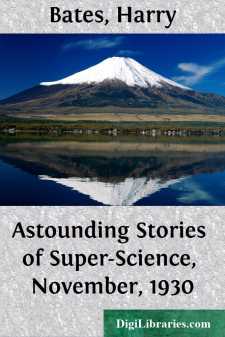 his news," said Cliff Hynes, pointing to the newspaper, "means the end of homo Americanus."

Out of the Antarctic it came—a wall of viscid, grey, half-human jelly, absorbing and destroying all life that it encountered.

The newspaper in question was the hour-sheet of the International Broadcast Association, just delivered by pneumatic tube at the laboratory. It was stamped 1961, Month 13, Day 7, Horometer 3, and the headlines on the front page confirmed the news of the decisive defeat of the American military and naval forces at the hands of the Chinese Republic.

A gallant fight for days against hopeless odds; failure of the army dynamos; airships cut off from ground guidance; battleships ripped to pieces by the Chinese disintegrators; and, finally, the great wave of black death that had wiped out two hundred thousand men.

Kay Bevan—to use the old-fashioned names which still persisted, despite the official numerical nomenclature—glanced through the account. He threw the sheet away. "We deserved it, Cliff," he said.

Cliff nodded. "You saw that bit about the new Chinese disintegrator? If the Government had seriously considered our Crumbler—"

Kay glanced at the huge, humming top that filled the center of the laboratory. It spun so fast that it appeared as nothing but a spherical shadow, through which one could see the sparse furnishings, the table, the apparatus ranged upon it, and the window over-looking the upper streets of New York.

"Yes—if!" he answered bitterly. "And I'm willing to bet the Chinese have an inferior machine, built upon the plans that Chinese servant stole from us last year."

"We deserved it, Cliff," said Kay again. "For ten years we've harried and enslaved the yellow man, and taken a hundred thousand of his men and women to sacrifice to the Earth Giants. What would we have done, if conditions had been reversed?"

"Exactly. The law of the survival of the fittest. They thought that they were fitter to survive. I tell you they had right on their side, Cliff, and that's what's beaten us. Now—a hundred thousand of our own boys and girls must be fed into the maw of these monsters every year. God, suppose it were Ruth!"

"Or you or I," said Cliff. "If only we could perfect the Crumbler!"

"What use would that be against the Earth Giants? There's nothing organic about them, not even bones. Pure protoplasm!"

"We could have used it against the Chinese," said Cliff. "Now—" He shrugged his shoulders hopelessly.

nd if explorers had been content to leave the vast unknown Antarctic Continent alone, they would never have taught the imprisoned Giants to cross the great ice barrier. But that crossing had taken place fifteen years ago, and already the mind of man had become accustomed to the grim facts.

Who could have dreamed that the supposed table-land was merely a rim of ice-mountains, surrounding a valley twice the size of Europe, so far below sea-level that it was warmed to tropic heat by Earth's interior fires? Or that this valley was peopled with what could best be described as organized protoplasm...?