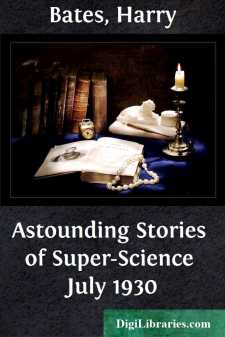 McQuarrie, the City Editor, looked up as I entered his office.

"I know him slightly," I replied cautiously. "I have met him several times and I interviewed him some years ago when he improved the Hadley rocket motor. I can't claim a very extensive acquaintance with him."

"I thought you knew him well. It is a surprise to me to find that there is any prominent man who is not an especial friend of yours. At any rate you know him as well as anyone of the staff, so I'll give you the assignment."

For eighty vertical miles Carpenter and Bond blasted their way—only to be trapped by the extraordinary monsters of the heaviside layer.

"He's going to try to punch a hole in the heaviside layer."

My voice died away in silence. True enough, the idea of trying to make a permanent hole in a field of magnetic force was absurd, but even as I spoke I remembered that Jim Carpenter had never agreed to the opinion almost unanimously held by our scientists as to the true nature of the heaviside layer.

"It may be impossible," replied McQuarrie dryly, "but you are not hired by this paper as a scientific consultant. For some reason, God alone knows why, the owner thinks that you are a reporter. Get down there and try to prove he is right by digging up a few facts about Carpenter's attempt. Wire your stuff in and Peavey will write it up. On this one occasion, please try to conceal your erudition and send in your story in simple words of one syllable which uneducated men like Peavey and me can comprehend. That's all."

He turned again to his desk and I left the room. At one time I would have come from such an interview with my face burning, but McQuarrie's vitriol slid off me like water off a duck's back. He didn't really mean half of what he said, and he knew as well as I did that his crack about my holding my job with the Clarion as a matter of pull was grossly unjust. It is true that I knew Trimble, the owner of the Clarion, fairly well, but I got my job without any aid from him. McQuarrie himself hired me and I held my job because he hadn't fired me, despite the caustic remarks which he addressed to me. I had made the mistake when I first got on the paper of letting McQuarrie know that I was a graduate electrical engineer from Leland University, and he had held it against me from that day on. I don't know whether he really held it seriously against me or not, but what I have written above is a fair sample of his usual manner toward me.

In point of fact I had greatly minimized the extent of my acquaintance with Jim Carpenter. I had been in Leland at the same time that he was and had known him quite well. When I graduated, which was two years after he did, I worked for about a year in his laboratory, and my knowledge of the improvement which had made the Hadley rocket motor a practicability came from first hand knowledge and not from an interview. That was several years before but I knew that he never forgot an acquaintance, let alone a friend, and while I had left him to take up other work our parting had been pleasant, and I looked forward with real pleasure to seeing him again.