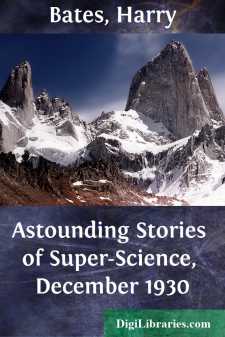 batalões turned from the open waters of the lower Tapajos River into the igarapé, the lily-smothered shallows that often mark an Indian settlement in the jungles of Brazil. One of the two half-breed rubber-gatherers suddenly stopped his batalõe by thrusting a paddle against a giant clump of lilies. In a corruption of the Tupi dialect, he called over to the white man occupying the other frail craft.

Fate’s retribution was adequate. There emerged a rat with a man’s head and face.

“We dare go no farther, master. The country of the Ungapuks is bewitched. It is too dangerous.”

Fearfully he stared over his shoulder toward a spot in the slimy water where a dim bulk moved, which was only an alligator hunting for his breakfast.

Hale Oakham, as long and lanky and level-eyed as Charles Lindbergh, ran despairing fingers through his damp hair and groaned.

“But how can I find this jungle village without a guide?”

The caboclo shrugged. “The village will find you. It is bewitched, master. But you will soon see the path through the matto.”

“Can’t you stay by me until time to land? I don’t like the looks of these alligators.”

“It is better for a white man to face an alligator than for a caboclo to face an Ungapuk. Once they used to kill and eat us for our strength. Now—” Again his shrug was eloquent.

“The white god who put a spell on these one-time cannibals will bewitch us and make us wash and rejoice when it is time to die.”

He shuddered and spat at a cayman that was lumbering away from his batalõe.

Hale Oakham laughed, a hearty boyish laugh for a rather learned young professor.

“No. All who enter this magic matto die soon, rejoicing. Before the last breath comes, it is said their bodies turn into a handful of silver dust—poof!—like that.” He snapped his dirty fingers. “Then the life that leaves them goes into rocks that walk.”

Hale sighed resignedly. There wasn’t any use to argue.

“Unload your batalõe,” he ordered testily, “and get your filthy carcasses away.”

The half-breeds obeyed readily. As the departing batalõe turned from the igarapé into the open water of the river, the young man repressed a sudden lifting of his scalp. He was in for it now!

His long body sprawled out in the batalõe, he paddled about aimlessly for several minutes until he found an aisle through the jungle—the path that led to the jungle village which he was visiting in the name of science, and for a certain award.

Before plunging into that waiting tangle where life and death carried on a visible, unceasing struggle, he hesitated. Instinctively he shrank from losing himself in that mad green world.

He had first heard of the Ungapuks at the convention of the Nescience Club in New York, that body of scientists, near-scientists and adventurers linked together for the purpose of awarding the yearly Woolman prizes for the most spectacular addition of empiric facts to various branches of science....