Appreciations and Criticisms of the Works of Charles Dickens 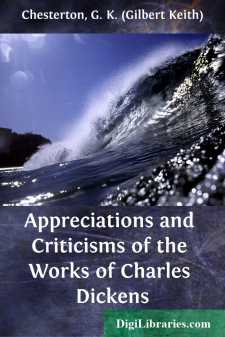 These papers were originally published as prefaces to the separate books of Dickens in one of the most extensive of those cheap libraries of the classics which are one of the real improvements of recent times. Thus they were harmless, being diluted by, or rather drowned in Dickens. My scrap of theory was a mere dry biscuit to be taken with the grand tawny port of great English comedy; and by most people it was not taken at all—like the biscuit. Nevertheless the essays were not in intention so aimless as they appear in fact. I had a general notion of what needed saying about Dickens to the new generation, though probably I did not say it. I will make another attempt to do so in this prologue, and, possibly fail again.

There was a painful moment (somewhere about the eighties) when we watched anxiously to see whether Dickens was fading from the modern world. We have watched a little longer, and with great relief we begin to realise that it is the modern world that is fading. All that universe of ranks and respectabilities in comparison with which Dickens was called a caricaturist, all that Victorian universe in which he seemed vulgar—all that is itself breaking up like a cloudland. And only the caricatures of Dickens remain like things carved in stone. This, of course, is an old story in the case of a man reproached with any excess of the poetic. Again and again when the man of visions was pinned by the sly dog who knows the world,

“The man recovered of the bite,The dog it was that died.”

To call Thackeray a cynic, which means a sly dog, was indeed absurd; but it is fair to say that in comparison with Dickens he felt himself a man of the world. Nevertheless, that world of which he was a man is coming to an end before our eyes; its aristocracy has grown corrupt, its middle class insecure, and things that he never thought of are walking about the drawing-rooms of both. Thackeray has described for ever the Anglo-Indian Colonel; but what on earth would he have done with an Australian Colonel? What can it matter whether Dickens’s clerks talked cockney now that half the duchesses talk American? What would Thackeray have made of an age in which a man in the position of Lord Kew may actually be the born brother of Mr. Moss of Wardour Street? Nor does this apply merely to Thackeray, but to all those Victorians who prided themselves on the realism or sobriety of their descriptions; it applies to Anthony Trollope and, as much as any one, to George Eliot. For we have not only survived that present which Thackeray described: we have even survived that future to which George Eliot looked forward. It is no longer adequate to say that Dickens did not understand that old world of gentility, of parliamentary politeness and the balance of the constitution. That world is rapidly ceasing to understand itself. It is vain to repeat the complaint of the old Quarterly Reviewers, that Dickens had not enjoyed a university education. What would the old Quarterly Reviewers themselves have thought of the Rhodes Scholarships? It is useless to repeat the old tag that Dickens could not describe a gentleman. A gentleman in our time has become something quite indescribable.

Now the interesting fact is this: That Dickens, whom so many considered to be at the best a vulgar enthusiast, saw the coming change in our society much more soberly and scientifically than did his better educated and more pretentious contemporaries. I give but one example out of many. Thackeray was a good Victorian radical, who seems to have gone to his grave quite contented with the early Victorian radical theory—the theory which Macaulay preached with unparalleled luminosity and completeness; the theory that true progress goes on so steadily through human history, that while reaction is indefensible, revolution is unnecessary. Thackeray seems to have been quite content to think that the world would grow more and more liberal in the limited sense; that Free Trade would get freer; that ballot boxes would grow more and more secret; that at last (as some satirist of Liberalism puts it) every man would have two votes instead of one. There is no trace in Thackeray of the slightest consciousness that progress could ever change its direction....