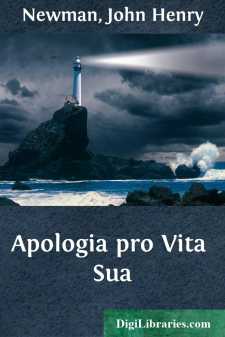 "No autobiography in the English language has been more read; to the nineteenth century it bears a relation not less characteristic than Boswell's 'Johnson' to the eighteenth."

Newman was already a recognised spiritual leader of over thirty year's standing, but not yet a Cardinal, when in 1864 he wrote the Apologia. He was London born, and he had, as many Londoners have had, a foreign strain in him. His father came of Dutch stock; his mother was a Fourdrinier, daughter of an old French Huguenot family settled in this country. The date of his birth, 21st of February 1801, relates him to many famous contemporaries, from Heine to Renan, from Carlyle to Pusey. Sent to school at Ealing—an imaginative seven-year-old schoolboy, he was described even then as being fond of books and seriously minded. It is certain he was deeply read in the English Bible, thanks to his mother's care, before he began Latin and Greek. Another lifelong influence—as we may be prepared to find by a signal reference in the following autobiography, was Sir Walter Scott; and in a later page he speaks of reading in bed Waverley and Guy Mannering when they first came out—"in the early summer mornings," and of his delight in hearing The Lay of the Last Minstrel read aloud. Like Ruskin, another nineteenth-century master of English prose, he was finely affected by these two powerful inductors. They worked alike upon his piety and his imagination which was its true servant, and they helped to foster his seemingly instinctive style and his feeling for the English tongue.

In 1816 he went to Oxford—to Trinity College—and two years later gained a scholarship there. His father's idea was that he should read for the bar, and he kept a few terms at Lincoln's Inn; but in the end Oxford, which had, about the year of his birth, experienced a rebirth of ideas, thanks to the widening impulse of the French Revolution, held him, and Oriel College—the centre of the "Noetics," as old Oxford called the Liberal set in contempt—made him a fellow. His association there with Pusey and Keble is a matter of history; and the Oxford Movement, in which the three worked together, was the direct result, according to Dean Church, of their "searchings of heart and communing" for seven years, from 1826 to 1833. A word might be said of Whately too, whose Logic Newman helped to beat into final form in these Oxford experiences. Not since the days of Colet and Erasmus had the University experienced such a shaking of the branches. However, there is no need to do more than allude to these intimately dealt with in the Apologia itself.

There, indeed, the stages of Newman's pilgrimage are related with a grace and sincerity of style that have hardly been equalled in English or in any northern tongue. It ranges from the simplest facts to the most complicated polemical issues and is always easily in accord with its changing theme. So much so, that the critics themselves have not known whether to admire more the spiritual logic of the literary art of the writer and self-confessor....