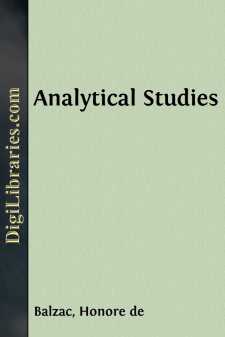 The two Analytical Studies, Physiology of Marriage and Petty Troubles of Married Life, belong quite apart from the action of the Comedie Humaine, and can only be included therein by virtue of a special dispensation on the part of their author, who made for them an eighth division therein, thus giving them a local habitation and a name. Although they come far down in the list of titles, their creation belongs almost to the formative era. Balzac had just shaken his skirts clear of the immature dust of the Oeuvres de Jeunesse, and by the publication, in 1829, of The Chouans, had made his first real bow to his larger public. In December of that same year appeared the Physiology of Marriage, followed eleven months later by a few papers belonging to Petty Troubles of Married Life. Meanwhile, between these two Analytical Studies, came a remarkable novelette, At the Sign of the Cat and Racket, followed soon after by one of the most famous stories of the entire Comedie, The Magic Skin.

We are thus particular to place the two Analytical Studies in time and in environment, that the wonderful versatility of the author may become apparent—and more: that Balzac may be vindicated from the charge of dullness and inaccuracy at this period. Such traits might have been charged against him had he left only the Analytical Studies. But when they are preceded by the faithful though heavy scene of military life, and succeeded by the searching and vivid philosophical study, their faults and failures may be considered for the sake of their company.

It is hard to determine Balzac's full purpose in including the Analytical Studies in the Comedie. They are not novels. The few, lightly-sketched characters are not connected with those of the Comedie, save in one or two remote instances. They must have been included in order to make one more room in the gigantic mansion which the author had planned. His seventh sense of subdivision saw here fresh material to classify. And so these grim, almost sardonic essays were placed where they now appear.

In all kindness, the Balzac novitiate is warned against beginning an acquaintance with the author through the medium of the Analytical Studies. He would be almost certain to misjudge Balzac's attitude, and might even be tempted to forsake his further cultivation. The mistake would be serious for the reader and unjust to the author. These studies are chiefly valuable as outlining a peculiar—and, shall we say, forced?—mood that sought expression in an isolated channel. All his life long, Balzac found time for miscellaneous writings —critiques, letters, reviews, essays, political diatribes and sketches. In early life they were his "pot-boilers," and he never ceased writing them, probably urged partly by continued need of money, partly through fondness for this sort of thing. His Physiology is fairly representative of the material, being analysis in satirical vein of sundry foibles of society. This class of composition was very popular in the time of Louis Philippe....