An Old Woman's Tale (From: "The Doliver Romance and Other Pieces: Tales and Sketches") 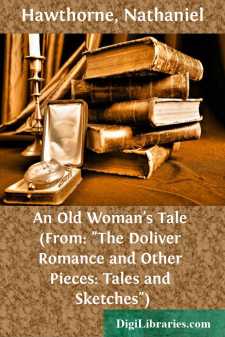 In the house where I was born, there used to be an old woman crouching all day long over the kitchen fire, with her elbows on her knees and her feet in the ashes. Once in a while she took a turn at the spit, and she never lacked a coarse gray stocking in her lap, the foot about half finished; it tapered away with her own waning life, and she knit the toe-stitch on the day of her death. She made it her serious business and sole amusement to tell me stories at any time from morning till night, in a mumbling, toothless voice, as I sat on a log of wood, grasping her cheek-apron in both my hands. Her personal memory included the better part of a hundred years, and she had strangely jumbled her own experience and observation with those of many old people who died in her young days; so that she might have been taken for a contemporary of Queen Elizabeth, or of John Rogers in the Primer. There are a thousand of her traditions lurking in the corners and by-places of my mind, some more marvellous than what is to follow, some less so, and a few not marvellous in the least, all of which I should like to repeat, if I were as happy as she in having a listener. But I am humble enough to own, that I do not deserve a listener half so well as that old toothless woman, whose narratives possessed an excellence attributable neither to herself, nor to any single individual. Her ground-plots, seldom within the widest scope of probability, were filled up with homely and natural incidents, the gradual accretions of a long course of years, and fiction hid its grotesque extravagance in this garb of truth, like the Devil (an appropriate simile, for the old woman supplies it) disguising himself, cloven-foot and all, in mortal attire. These tales generally referred to her birthplace, a village in, the valley of the Connecticut, the aspect of which she impressed with great vividness on my fancy. The houses in that tract of country, long a wild and dangerous frontier, were rendered defensible by a strength of architecture that has preserved many of them till our own times, and I cannot describe the sort of pleasure with which, two summers since, I rode through the little town in question, while one object after another rose familiarly to my eye, like successive portions of a dream becoming realized. Among other things equally probable, she was wont to assert that all the inhabitants of this village (at certain intervals, but whether of twenty-five or fifty years, or a whole century, remained a disputable point) were subject to a simultaneous slumber, continuing one hour's space. When that mysterious time arrived, the parson snored over his half-written sermon, though it were Saturday night and no provision made for the morrow,—the mother's eyelids closed as she bent over her infant, and no childish cry awakened,—the watcher at the bed of mortal sickness slumbered upon the death-pillow, and the dying man anticipated his sleep of ages by one as deep and dreamless. To speak emphatically, there was a soporific influence throughout the village, stronger than if every mother's son and daughter were reading a dull story; notwithstanding which the old woman professed to hold the substance of the ensuing account from one of those principally concerned in it.

One moonlight summer evening, a young man and a girl sat down together in the open air. They were distant relatives, sprung from a stock once wealthy, but of late years so poverty-stricken, that David had not a penny to pay the marriage fee, if Esther should consent to wed. The seat they had chosen was in an open grove of elm and walnut trees, at a right angle of the road; a spring of diamond water just bubbled into the moonlight beside them, and then whimpered away through the bushes and long grass, in search of a neighboring millstream. The nearest house (situate within twenty yards of them, and the residence of their great-grandfather in his lifetime) was a venerable old edifice, crowned with many high and narrow peaks, all overrun by innumerable creeping plants, which hung curling about the roof like a nice young wig on an elderly gentleman's head. Opposite to this establishment was a tavern, with a well and horse-trough before it, and a low green bank running along the left side of the door. Thence, the road went onward, curving scarce perceptibly, through the village, divided in the midst by a narrow lane of verdure, and bounded on each side by a grassy strip of twice its own breadth. The houses had generally an odd look. Here, the moonlight tried to get a glimpse of one, a rough old heap of ponderous timber, which, ashamed of its dilapidated aspect, was hiding behind a great thick tree; the lower story of the next had sunk almost under ground, as if the poor little house were a-weary of the world, and retiring into the seclusion of its own cellar; farther on stood one of the few recent structures, thrusting its painted face conspicuously into the street, with an evident idea that it was the fairest thing there. About midway in the village was a grist-mill, partly concealed by the descent of the ground towards the stream which turned its wheel. At the southern extremity, just so far distant that the window-paces dazzled into each other, rose the meeting-house, a dingy old barn-like building, with an enormously disproportioned steeple sticking up straight into heaven, as high as the Tower of Babel, and the cause of nearly as much confusion in its day. This steeple, it must be understood, was an afterthought, and its addition to the main edifice, when the latter had already begun to decay, had excited a vehement quarrel, and almost a schism in the church, some fifty years before. Here the road wound down a hill and was seen no more, the remotest object in view being the graveyard gate, beyond the meetinghouse. The youthful pair sat hand in hand beneath the trees, and for several moments they had not spoken, because the breeze was hushed, the brook scarce tinkled, the leaves had ceased their rustling, and everything lay motionless and silent as if Nature were composing herself to slumber.

"What a beautiful night it is, Esther!" remarked David, somewhat drowsily.

"Very beautiful," answered the girl, in the same tone.