An Essay on the Lyric Poetry of the Ancients 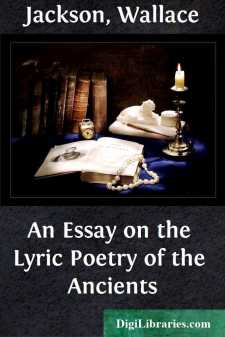 John Ogilvie (1733-1813), Presbyterian divine and author, was one of a group of Scottish literary clergy and a fellow of the Edinburgh Royal Society. Chambers and Thomson print the following generous estimation of his work:

Of all his books, there is not one which, as a whole, can be expected to please the general reader. Noble sentiments, brilliant conceptions, and poetic graces, may be culled in profusion from the mass; but there is no one production in which they so predominate, (if we except some of the minor pieces,) as to induce it to be selected for a happier fate than the rest. Had the same talent which Ogilvie threw away on a number of objects, been concentrated on one, and that one chosen with judgment and taste, he might have rivalled in popularity the most renowned of his contemporaries.

The present letters reproduced here, along with the two volumes of his Philosophical and Critical Observations on Composition (London, 1774), are Ogilvie’s major contributions to literary criticism. The remainder of his work, which is extensive, is divided almost equally between poetry and theological inquiry. At least one of his poems, “The Day of Judgment” (1758), was known to Churchill, Boswell, and Johnson, but unfortunately for Ogilvie’s reputation Johnson “saw nothing” in it.

I shall attempt no special pleading for Ogilvie here; he is and shall remain a minor neoclassic theorist. At the very least, however, it can be said that his methods are reasonably various and that, while his general critical assumptions are not unique, his control is strong. The fluidity with which he moves from one related position to another indicates a mind well informed by the critical tenets of his own time. If he does not surprise, he is nevertheless an interesting and worthy exemplar of the psychological tradition in later eighteenth-century criticism; and his historicism provides, and is intended to provide, an extensive field for the workings of psychological inquiry.

Thus his initial inquiry, in the first letter, into the Aristotelian principles of imitation and harmony establishes each as “natural” to the mind, and his distinctions between the separate provinces of reason and imagination are for the purpose of assigning to each its separate intellectual capacities. From these orderings follows his idea that poetry is of an earlier date than philosophy, the product of an irregular faculty, less governable than the reason and of swifter development. In turn, these assumptions lead into a form of historical primitivism in which the products of the first poets were “extemporary effusions,” rudely imitative of pastoral scenes or celebratory of the divine being. Thus the first generic distinction Ogilvie makes is between pastoral poetry and lyric; the function of the former is to produce pleasure, the latter to raise admiration of the powers presiding over nature. As poetry is more natural to the young mind than philosophy, so is the end of pastoral poetry more easily achieved than that of the lyric....