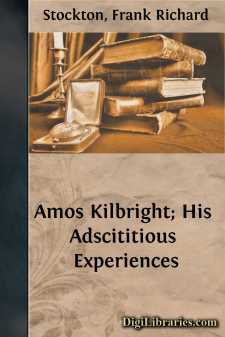 [This story is told by Mr. Richard Colesworthy, an attorney-at-law, in a large town in one of our Eastern States. The fact that Mr. Colesworthy is a practical man, and but little given, outside of his profession, to speculative theorizing, adds a weight to his statements which they might not otherwise possess.]

In the practice of my profession I am in the habit of meeting with all sorts and conditions of men, women, and even children. But I do not know that I ever encountered anyone who excited in me a greater interest than the man about whom I am going to tell you.

I was busily engaged one morning in my office, which is on the ground floor of my dwelling and opens upon the street, when, after a preliminary knock, a young man entered and asked leave to speak with me. He was tall and well made, plainly but decently dressed, and with a fresh, healthy color on his smoothly shaven face. There was something in his air, a sort of respectful awkwardness, which was not without a suggestion of good breeding, and in his countenance there was an annoyed or troubled expression which did not sit well upon it. I asked him to take a chair, and as he did so the thought came to me that I should like to be of service to him. Of course I desire to aid and benefit all my clients, but there are some persons whose appearance excites in one an instinctive sympathy, and toward whom there arise at first sight sentiments of kindliness. The man had said almost nothing; it was simply his manner that had impressed me. I mention these points because generally I do not take an interest in persons until I know a good deal about them.

The man did not immediately answer, but began searching for something in one of the pockets of his coat. The little awkwardness which I had first noticed, now became more apparent. He appeared to be looking for his pockets rather than for what might be in one of them. He was conscious of his ungainliness and reddened a little as he fumbled on the inside and outside of his coat.

"I pray you pardon me," he said, "but I will bring before you instantly the matter of my business."

And so saying, he got his hand into a breast pocket and drew out a little packet. There was a certain intonation of his voice which, at first made me think that he was not an American, but in that intonation there was really nothing foreign. He was certainly a stranger, he might be from the backwoods, and both his manner and speech appeared odd to me; but soon I had no doubt about his being my countryman. In fact, there was something in his general appearance which seemed to me to be distinctively American.

"I came to you, sir," he said, "to ask if you would have the goodness to purchase one or more of these tickets?" And he held out to me a card entitling one person to admission to a séance to be given by a party of spiritualists in one of the public buildings of the town.

A feeling of anger arose within me. I was chagrined to think that I had begun to interest myself in a person who merely came to interrupt me in my business by trying to sell me tickets to a spiritualistic exhibition....