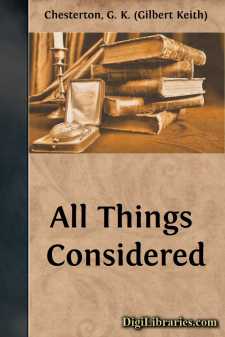 THE CASE FOR THE EPHEMERAL

I cannot understand the people who take literature seriously; but I can love them, and I do. Out of my love I warn them to keep clear of this book. It is a collection of crude and shapeless papers upon current or rather flying subjects; and they must be published pretty much as they stand. They were written, as a rule, at the last moment; they were handed in the moment before it was too late, and I do not think that our commonwealth would have been shaken to its foundations if they had been handed in the moment after. They must go out now, with all their imperfections on their head, or rather on mine; for their vices are too vital to be improved with a blue pencil, or with anything I can think of, except dynamite.

Their chief vice is that so many of them are very serious; because I had no time to make them flippant. It is so easy to be solemn; it is so hard to be frivolous. Let any honest reader shut his eyes for a few moments, and approaching the secret tribunal of his soul, ask himself whether he would really rather be asked in the next two hours to write the front page of the Times, which is full of long leading articles, or the front page of Tit-Bits, which is full of short jokes. If the reader is the fine conscientious fellow I take him for, he will at once reply that he would rather on the spur of the moment write ten Times articles than one Tit-Bits joke. Responsibility, a heavy and cautious responsibility of speech, is the easiest thing in the world; anybody can do it. That is why so many tired, elderly, and wealthy men go in for politics. They are responsible, because they have not the strength of mind left to be irresponsible. It is more dignified to sit still than to dance the Barn Dance. It is also easier. So in these easy pages I keep myself on the whole on the level of the Times: it is only occasionally that I leap upwards almost to the level of Tit-Bits.

I resume the defence of this indefensible book. These articles have another disadvantage arising from the scurry in which they were written; they are too long-winded and elaborate. One of the great disadvantages of hurry is that it takes such a long time. If I have to start for High-gate this day week, I may perhaps go the shortest way. If I have to start this minute, I shall almost certainly go the longest. In these essays (as I read them over) I feel frightfully annoyed with myself for not getting to the point more quickly; but I had not enough leisure to be quick. There are several maddening cases in which I took two or three pages in attempting to describe an attitude of which the essence could be expressed in an epigram; only there was no time for epigrams. I do not repent of one shade of opinion here expressed; but I feel that they might have been expressed so much more briefly and precisely. For instance, these pages contain a sort of recurring protest against the boast of certain writers that they are merely recent. They brag that their philosophy of the universe is the last philosophy or the new philosophy, or the advanced and progressive philosophy....