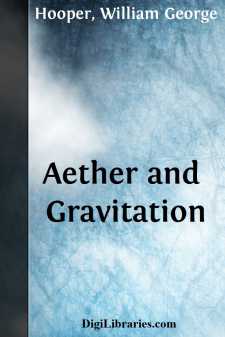 The author in this work endeavours to solve the greatest scientific problem that has puzzled scientists for the past two hundred years. The question has arisen over and over again, since the discovery of universal gravitation by Sir Isaac Newton, as to what is the physical cause of the attraction of gravitation.

“Action at a distance” has long ceased to be recognized as a possible phenomenon, although up to the present, the medium and method of gravitational attraction have not yet been discovered.

It is, however, generally accepted by scientists, that the only possible medium which can give rise to the phenomena incidental to, and associated with the Law of Gravitation, must be the universal aether, which forms the common medium of all phenomena associated with light, heat, electricity and magnetism.

It is impossible, however, to reconcile gravitational phenomena with the present conception of the universal aether medium, and a new theory is therefore demanded, before the long-sought-for explanation will be forthcoming.

Professor Glazebrook definitely states the necessity for a new theory in his work on J. C. Maxwell, page 221, where he writes: “We are waiting for some one to give us a theory of the aether, which shall include the facts of electricity and magnetism, luminous radiation, and it may be gravitation.”

A new theory of the aether is also demanded in view of the recent experimental results of Professor Lebedew, and Nichols and Hull of America. It is logically impossible to reconcile a frictionless aether, with their results relative to the pressure of light waves.

In the following pages of this work the author has endeavoured to perfect a theory, which will bring aetherial physics more into harmony with modern observation and experiments; and by so doing, believes that he has found the key that will unlock the problem not only of the cause of universal gravitation, but also other problems of physical science. The author has taken Newton's Rules of Philosophy as his guide in the making of the new theory, as he believes that if any man knew anything of the rules of Philosophy, that man was Sir Isaac Newton. The first chapter therefore deals with the generally recognized rules which govern philosophical reasoning, the same being three in number; the fundamental rule being, that in making any hypothesis, the results of experience as obtained by observation and experiments must not be violated.

In applying the rules to the present theory of the aether, he found that the theory as at present recognized violated two of the most important rules of Philosophy, because, while aether is supposed to be matter, yet it failed to fulfil the primary property of all matter, that is, it is not subject to the Law of Gravitation. If aether is matter, then, to be strictly logical and philosophical, it must possess the properties of matter as revealed by observation and experiment.

Those properties are given in Chapter ., where it is shown that they are atomicity, heaviness or weight, elasticity, density, inertia, and compressibility....