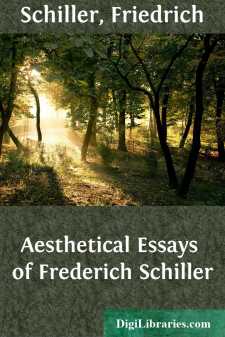 The special subject of the greater part of the letters and essays of Schiller contained in this volume is Aesthetics; and before passing to any remarks on his treatment of the subject it will be useful to offer a few observations on the nature of this topic, and on its treatment by the philosophical spirit of different ages.

First, then, aesthetics has for its object the vast realm of the beautiful, and it may be most adequately defined as the philosophy of art or of the fine arts. To some the definition may seem arbitrary, as excluding the beautiful in nature; but it will cease to appear so if it is remarked that the beauty which is the work of art is higher than natural beauty, because it is the offspring of the mind. Moreover, if, in conformity with a certain school of modern philosophy, the mind be viewed as the true being, including all in itself, it must be admitted that beauty is only truly beautiful when it shares in the nature of mind, and is mind's offspring.

Viewed in this light, the beauty of nature is only a reflection of the beauty of the mind, only an imperfect beauty, which as to its essence is included in that of the mind. Nor has it ever entered into the mind of any thinker to develop the beautiful in natural objects, so as to convert it into a science and a system. The field of natural beauty is too uncertain and too fluctuating for this purpose. Moreover, the relation of beauty in nature and beauty in art forms a part of the science of aesthetics, and finds again its proper place.

But it may be urged that art is not worthy of a scientific treatment. Art is no doubt an ornament of our life and a charm to the fancy; but has it a more serious side? When compared with the absorbing necessities of human existence, it might seem a luxury, a superfluity, calculated to enfeeble the heart by the assiduous worship of beauty, and thus to be actually prejudicial to the true interest of practical life. This view seems to be largely countenanced by a dominant party in modern times, and practical men, as they are styled, are only too ready to take this superficial view of the office of art.

Many have indeed undertaken to defend art on this score, and to show that, far from being a mere luxury, it has serious and solid advantages. It has been even apparently exaggerated in this respect, and represented as a kind of mediator between reason and sense, between inclination and duty, having as its mission the work of reconciling the conflicting elements in the human heart. A strong trace of this view will be found in Schiller, especially in all that he says about the play-instinct in his "Aesthetical Letters."

Nevertheless, art is worthy of science; aesthetics is a true science, and the office of art is as high as that assigned to it in the pages of Schiller. We admit that art viewed only as an ornament and a charm is no longer free, but a slave. But this is a perversion of its proper end. Science has to be considered as free in its aim and in its means, and it is only free when liberated from all other considerations; it rises up to truth, which is its only real object, and can alone fully satisfy it....