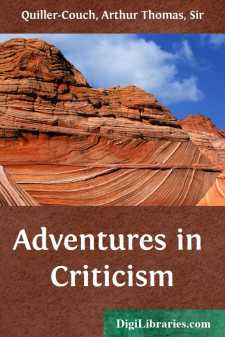 After twenty-five years of close toil, Professor Skeat has completed his great edition of Chaucer. It is obviously easier to be dithyrambic than critical in chronicling this event; to which indeed dithyrambs are more appropriate than criticism. For when a man writes Opus vitæ meæ at the conclusion of such a task as this, and so lays down his pen, he must be a churl (even if he be also a competent critic) who will allow no pause for admiration. And where, churl or no churl, is the competent critic to be found? The Professor has here compiled an entirely new text of Chaucer, founded solely on the manuscripts and the earliest printed editions that are accessible. Where Chaucer has translated, the originals have been carefully studied: "the requirements of metre and grammar have been carefully considered throughout": and "the phonology and spelling of every word have received particular attention." We may add that all the materials for a Life of Chaucer have been sought out, examined, and pieced together with exemplary care.

All this has taken Professor Skeat twenty-five years, and in order to pass competent judgment on his conclusions the critic must follow him step by step through his researches—which will take the critic (even if we are charitable enough to suppose his mental equipment equal to Professor Skeat's) another ten years at least. For our time, then, and probably for many generations after, this edition of Chaucer will be accepted as final.

And the Clarendon Press.

And I seem to see in this edition of Chaucer the beginning of the realization of a dream which I have cherished since first I stood within the quadrangle of the Clarendon Press—that fine combination of the factory and the palace. The aspect of the Press itself repeats, as it were, the characteristics of its government, which is conducted by an elected body as an honorable trust. Its delegates are not intent only on money-getting. And yet the Clarendon Press makes money, and the University can depend upon it for handsome subsidies. It may well depend upon it for much more. As the Bank of England—to which in its system of government it may be likened—is the focus of all the other banks, private or joint-stock, in the kingdom, and the treasure-house, not only of the nation's gold, but of its commercial honor, so the Clarendon Press—traditionally careful in its selections and munificent in its rewards—might become the academy or central temple of English literature. If it would but follow up Professor Skeat's Chaucer with a resolution to publish, at a pace suitable to so large an undertaking, all the great English classics, edited with all the scholarship its wealth can command, I believe that before long the Clarendon Press would be found to be exercising an influence on English letters which is at present lacking, and the lack of which drives many to call, from time to time, for the institution in this country of something corresponding to the French Academy. I need only cite the examples of the Royal Society and the Marylebone Cricket Club to show that to create an authority in this manner is consonant with our national practice....