Adventurers of the Far North A Chronicle of the Frozen Seas 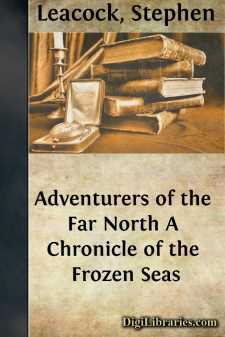 The map of Canada offers to the eye and to the imagination a vast country more than three thousand miles in width. Its eastern face presents a broken outline to the wild surges of the Atlantic. Its western coast commands from majestic heights the broad bosom of the Pacific. Along its southern boundary is a fertile country of lake and plain and woodland, loud already with the murmur of a rising industry, and in summer waving with the golden wealth of the harvest.

But on its northern side Canada is set fast against the frozen seas of the Pole and the desolate region of barren rock and ice-bound island that is joined to the polar ocean by a common mantle of snow. For hundreds and hundreds of miles the vast fortress of ice rears its battlements of shining glaciers. The unending sunshine of the Arctic summer falls upon untrodden snow. The cold light of the aurora illumines in winter an endless desolation. There is no sound, save when at times the melting water falls from the glistening sides of some vast pinnacle of ice, or when the leaden sea forces its tide between the rock-bound islands. Here in this vast territory civilization has no part and man no place. Life struggles northward only to die out in the Arctic cold. The green woods of the lake district and the blossoms of the prairies are left behind. The fertility of the Great West gives place to the rock-strewn wilderness of the barren grounds. A stunted and deformed vegetation fights its way to the Arctic Circle. Rude grasses and thin moss cling desperately to the naked rock. Animal life pushes even farther. The seas of the frozen ocean still afford a sustenance. Even mankind is found eking out a savage livelihood on the shores of the northern sea. But gradually all fades, until nothing is left but the endless plain of snow, stretching towards the Pole.

Yet this frozen northern land and these forbidding seas have their history. Deeds were here done as great in valour as those which led to the conquest of a Mexico or the acquisition of a Peru. But unlike the captains and conquerors of the South, the explorers have come and gone and left behind no trace of their passage. Their hopes of a land of gold, their vision of a new sea-way round the world, are among the forgotten dreams of the past. Robbed of its empty secret, the North still stretches silent and untenanted with nothing but the splendid record of human courage to illuminate its annals.

For us in our own day, the romance that once clung about the northern seas has drifted well nigh to oblivion. To understand it we must turn back in fancy three hundred years. We must picture to ourselves the aspect of the New World at the time when Elizabeth sat on the throne of England, and when the kingdoms of western Europe, Britain, France, and Spain, were rising from the confusion of the Middle Ages to national greatness. The existence of the New World had been known for nearly a hundred years. But it still remained shadowed in mystery and uncertainty....