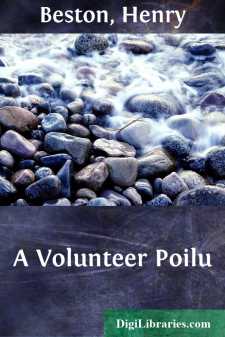 Moored alongside a great two-storied pier, with her bow to the land, the cargo and passenger boat, Rochambeau, of the Compagnie Générale was being loaded with American supplies for the France of the Great War. A hot August sun struck spots and ripples of glancing radiance from the viscous, oily surface of the foul basin in which she lay inert; the air was full of sounds, the wheezing of engines, the rattling of cog-checks, and the rumble of wheels and hoofs which swept, in sultry puffs of noise and odor, from the pavements on the land. Falling from the exhausts, a round, silvery-white cascade poured into the dark lane between the wharf and the deck, and sounded a monotonous, roaring underchord to the intermingled dins. At the sun-bathed bow, a derrick gang lowered bags of flour into the open well of the hold; there were commands in French, a chugging, and a hissing of steam, and a giant's clutch of dusty, hundred-kilo flour-bags from Duluth would swing from the wharf to the Rochambeau, sink, and disappear. In some way the unfamiliar language, and the sight of the thickset, French sailor-men, so evidently all of one race, made the Rochambeau, moored in the shadow of the sky-scrapers, seem mysteriously alien. But among the workers in the hold, who could be seen when they stood on the floor of the open hatchway, was a young, red-headed, American longshoreman clad in the trousers part of a suit of brown-check overalls; sweat and grime had befouled his rather foolish, freckled face, and every time that a bunch of flour-bags tumbled to the floor of the well, he would cry to an invisible somebody—"More dynamite, Joe, more dynamite!"

Walking side by side, like ushers in a wedding procession, two of the ship's officers made interminable rounds of the deck. Now and then they stopped and looked over the rail at the loading operations, and once in low tones they discussed the day's communiqué. "Pas grand' chose" (nothing of importance), said he whom I took to be the elder, a bearded, seafaring kind of man. "We have occupied a crater in the Argonne, and driven back a German patrol (une patrouille Boche) in the region of Nomény." The younger, blond, pale, with a wispy yellow mustache, listened casually, his eyes fixed on the turbulence below. The derrick gang were now stowing away clusters of great wooden boxes marked the Something Arms Company. "My brother says that American bullets are filled with powder of a very good quality" (d'une très bonne qualité), remarked the latter. "By the way, how is your brother?" asked the bearded man. "Very much better," answered the other; "the last fragment (éclat) was taken out of his thigh just before we left Bordeaux." They continued their walk, and three little French boys wearing English sailor hats took their places at the rail.

As the afternoon advanced, a yellow summer sun, sinking to a level with the upper fringes of the city haze, gave a signal for farewells; and little groups retired to quieter corners for good-byes....