A Treatise on the Art of Dancing 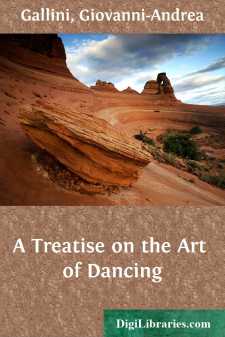 What I have here to say is rather in the nature of an apology than of a preface or advertisement. The very title of a Treatise upon the art of dancing by a dancing-master, implicitly threatens so much either of the exageration of the profession, or of the recommendation of himself, and most probably of both, that it cannot be improper for me to bespeak the reader’s favorable precaution against so natural a prejudice. My principal motive for hazarding this production is, indisputably, gratitude. The approbation with which my endeavours to please in the dances of my composition have been honored, inspired me with no sentiment so strongly as that of desiring to prove to the public, that sensibility of its favor; which, in an artist, is more than a duty. It is even one of the means of obtaining its favor, by its inspiring that aim at perfection, in order to the deserving it, which is unknown to a merely mercenary spirit. Under the influence of that sentiment, it occurred to me, that it might not be unpleasing to the public to have a fair state of the pretentions of this art to its encouragement, and even to its esteem, laid before it, by a practitioner of this art. In stating these pretentions, there is nothing I shall more avoid than the enthusiasm arising from that vanity or self-conceit, which leads people into the ridicule of over-rating the merit or importance of their profession. I shall not, for example, presume to recommend dancing as a virtue; but I may, without presumption, represent it as one of the principal graces, and, in the just light, of being employed in adorning and making Virtue amiable, who is far from rejecting such assistence. In the view of a genteel exercise, it strengthens the body; in the view of a liberal accomplishment, it visibly diffuses a graceful agility through it; in the view of a private or public entertainment, it is not only a general instinct of nature, expressing health and joy by nothing so strongly as by dancing; but is susceptible withall of the most elegant collateral embellishments of taste, from poetry, music, painting, and machinery.

One of the greatest and most admired institutors of youth, whose fine taste has been allowed clear from the least tincture of pedantry, Quintilian recommends especially the talent of dancing, as conducive to the formation of orators; not, as he very justly observes, that an orator should retain any thing of the air of a dancing-master, in his motion or gesture; but that the impression from the graces of that art should have insensibly stoln into his manner, and fashioned it to please.

Even that austere critic, Scaliger, made the principles of it so far his concern, that he was able personally to satisfy an Emperor’s curiosity, as to the nature and meaning of the Pirrhic dance, by executing it before him.

All this I mention purely to obviate the prepossession of the art being so frivolous, so unworthy of the attention of the manly and grave, as it is vulgarly, or on a superficial view, imagined....