A Treatise of Daunses Wherin It Is Shewed, That They Are as It Were Accessories And Dependants (Or Thynges Annexed) to Whoredome, (1581) 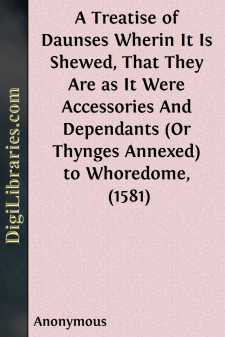 A Treatise Of Daunses, wherin it is shewed, that they are as it were accessories and dependants (or thynges annexed) to whoredome: where also by the way is touched and proued, that Playes are ioyned and knit togeather in a rancke or rowe with them.

Let eurie one possesse his vessel in holines and honor.

A Treatise of Daunses, in which is shewed, that daunses bee intisementes to whoredome, and that the abuse of playes ought not to be among Christians.

I Doubt not, but that some, into whose handes this little treatise shall come, will thinke me to be at greate leasure, that haue enterprised largely to leuie out and handle this argument: which to their seeming is not otherwise of great importaunce. For be it that daunses were allowed or condemned, or els yet they were putt in the rowe of thinges indifferent men might easily iudge according to their opinion, that that should not bring great profit or hurt to our christian common wealth, seeing that ther are diuers pointes of greater weight and consequence, which trouble the spirits of manye learned men, & make afraide the consciences of the weake and simple ones: which poyntes haue verye much nede to be opened and made plaine, rather then to trouble a mans selfe to write agaynst playes and daunses. Furthermore men should be in very great forwardnes, if euery thinge were so well refourmed, that they were come euen unto daunses, that is to say, that all that which is corrupted, and those abuses which beare the sway among Christians were so cut off, and this so sick a body againe so wel restored to his soundnes and health, that there should remayne nothing els but to debate the question of leaping skippings and daunses.

Ther will be found an other manner & sort of people, who will make no accoumpte at all to mocke at this matter: as indeede the world is ful of mockers, and men without Godlines, without God, and without religion. Now as concerninge these persons, they deserue no manner of aunsweare at al, because they do as soone scoffe at the principall pointes of christian religion, and that which directly concerneth the seruice of God, as matters of lesse weight and importaunce. Wherefore I not much regarding or caringe for the iudgement of such iudges, will let them runne to the water with the bridle uppon their head, or in their necke, as they say. But as touchinge the first, because they bee not altogeather malicious and obstinate, I hope, that ha= uing aunsweared their obiections, and declared the reasons which haue moued, yea rather driuen me forward or inforsed mee to descipher and sett out this matter, they will iudge my labour not to haue bene altogeather unprofitable.

It is then in the first place to bee wished and desired, that troubles beyng pacified, and all dissentions repressed, and put out, the spirits and consciences of men, should be assured and thorowly perswaded of that which appertaineth to their saluation. And indeede our Lorde hath stirred and raised up so perfect an age in al sciences & know= ledge, in which so many learned men, and of excellent learning and knowledge, haue so blessedly and diligently imployed them= selues to teach us the order and maner to liue well, some after one sort and fashion, and some after an other, that those which be not yet satisfyed, can not, or ought not, to lay the fault in any but in themselues....