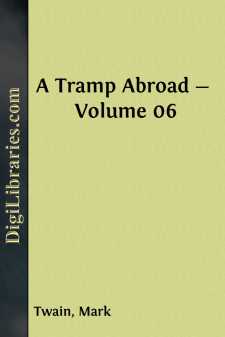 We did not oversleep at St. Nicholas. The church-bell began to ring at four-thirty in the morning, and from the length of time it continued to ring I judged that it takes the Swiss sinner a good while to get the invitation through his head. Most church-bells in the world are of poor quality, and have a harsh and rasping sound which upsets the temper and produces much sin, but the St. Nicholas bell is a good deal the worst one that has been contrived yet, and is peculiarly maddening in its operation. Still, it may have its right and its excuse to exist, for the community is poor and not every citizen can afford a clock, perhaps; but there cannot be any excuse for our church-bells at home, for there is no family in America without a clock, and consequently there is no fair pretext for the usual Sunday medley of dreadful sounds that issues from our steeples. There is much more profanity in America on Sunday than in all in the other six days of the week put together, and it is of a more bitter and malignant character than the week-day profanity, too. It is produced by the cracked-pot clangor of the cheap church-bells.

We build our churches almost without regard to cost; we rear an edifice which is an adornment to the town, and we gild it, and fresco it, and mortgage it, and do everything we can think of to perfect it, and then spoil it all by putting a bell on it which afflicts everybody who hears it, giving some the headache, others St. Vitus's dance, and the rest the blind staggers.

An American village at ten o'clock on a summer Sunday is the quietest and peacefulest and holiest thing in nature; but it is a pretty different thing half an hour later. Mr. Poe's poem of the "Bells" stands incomplete to this day; but it is well enough that it is so, for the public reciter or "reader" who goes around trying to imitate the sounds of the various sorts of bells with his voice would find himself "up a stump" when he got to the church-bell—as Joseph Addison would say. The church is always trying to get other people to reform; it might not be a bad idea to reform itself a little, by way of example. It is still clinging to one or two things which were useful once, but which are not useful now, neither are they ornamental. One is the bell-ringing to remind a clock-caked town that it is church-time, and another is the reading from the pulpit of a tedious list of "notices" which everybody who is interested has already read in the newspaper. The clergyman even reads the hymn through—a relic of an ancient time when hymn-books are scarce and costly; but everybody has a hymn-book, now, and so the public reading is no longer necessary. It is not merely unnecessary, it is generally painful; for the average clergyman could not fire into his congregation with a shotgun and hit a worse reader than himself, unless the weapon scattered shamefully. I am not meaning to be flippant and irreverent, I am only meaning to be truthful. The average clergyman, in all countries and of all denominations, is a very bad reader. One would think he would at least learn how to read the Lord's Prayer, by and by, but it is not so. He races through it as if he thought the quicker he got it in, the sooner it would be answered. A person who does not appreciate the exceeding value of pauses, and does not know how to measure their duration judiciously, cannot render the grand simplicity and dignity of a composition like that effectively.

We took a tolerably early breakfast, and tramped off toward Zermatt through the reeking lanes of the village, glad to get away from that bell. By and by we had a fine spectacle on our right. It was the wall-like butt end of a huge glacier, which looked down on us from an Alpine height which was well up in the blue sky. It was an astonishing amount of ice to be compacted together in one mass. We ciphered upon it and decided that it was not less than several hundred feet from the base of the wall of solid ice to the top of it—Harris believed it was really twice that. We judged that if St. Paul's, St. Peter's, the Great Pyramid, the Strasburg Cathedral and the Capitol in Washington were clustered against that wall, a man sitting on its upper edge could not hang his hat on the top of any one of them without reaching down three or four hundred feet—a thing which, of course, no man could do....