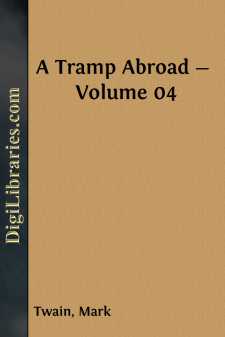 CHAPTER XXII [The Black Forest and Its Treasures]

From Baden-Baden we made the customary trip into the Black Forest. We were on foot most of the time. One cannot describe those noble woods, nor the feeling with which they inspire him. A feature of the feeling, however, is a deep sense of contentment; another feature of it is a buoyant, boyish gladness; and a third and very conspicuous feature of it is one's sense of the remoteness of the work-day world and his entire emancipation from it and its affairs.

Those woods stretch unbroken over a vast region; and everywhere they are such dense woods, and so still, and so piney and fragrant. The stems of the trees are trim and straight, and in many places all the ground is hidden for miles under a thick cushion of moss of a vivid green color, with not a decayed or ragged spot in its surface, and not a fallen leaf or twig to mar its immaculate tidiness. A rich cathedral gloom pervades the pillared aisles; so the stray flecks of sunlight that strike a trunk here and a bough yonder are strongly accented, and when they strike the moss they fairly seem to burn. But the weirdest effect, and the most enchanting is that produced by the diffused light of the low afternoon sun; no single ray is able to pierce its way in, then, but the diffused light takes color from moss and foliage, and pervades the place like a faint, green-tinted mist, the theatrical fire of fairyland. The suggestion of mystery and the supernatural which haunts the forest at all times is intensified by this unearthly glow.

We found the Black Forest farmhouses and villages all that the Black Forest stories have pictured them. The first genuine specimen which we came upon was the mansion of a rich farmer and member of the Common Council of the parish or district. He was an important personage in the land and so was his wife also, of course.

His daughter was the "catch" of the region, and she may be already entering into immortality as the heroine of one of Auerbach's novels, for all I know. We shall see, for if he puts her in I shall recognize her by her Black Forest clothes, and her burned complexion, her plump figure, her fat hands, her dull expression, her gentle spirit, her generous feet, her bonnetless head, and the plaited tails of hemp-colored hair hanging down her back.

The house was big enough for a hotel; it was a hundred feet long and fifty wide, and ten feet high, from ground to eaves; but from the eaves to the comb of the mighty roof was as much as forty feet, or maybe even more. This roof was of ancient mud-colored straw thatch a foot thick, and was covered all over, except in a few trifling spots, with a thriving and luxurious growth of green vegetation, mainly moss. The mossless spots were places where repairs had been made by the insertion of bright new masses of yellow straw. The eaves projected far down, like sheltering, hospitable wings. Across the gable that fronted the road, and about ten feet above the ground, ran a narrow porch, with a wooden railing; a row of small windows filled with very small panes looked upon the porch....