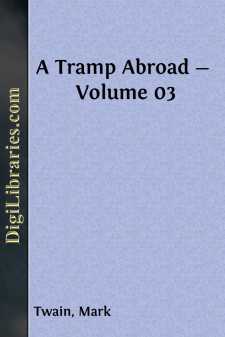 Men and women and cattle were at work in the dewy fields by this time. The people often stepped aboard the raft, as we glided along the grassy shores, and gossiped with us and with the crew for a hundred yards or so, then stepped ashore again, refreshed by the ride.

Only the men did this; the women were too busy. The women do all kinds of work on the continent. They dig, they hoe, they reap, they sow, they bear monstrous burdens on their backs, they shove similar ones long distances on wheelbarrows, they drag the cart when there is no dog or lean cow to drag it—and when there is, they assist the dog or cow. Age is no matter—the older the woman the stronger she is, apparently. On the farm a woman's duties are not defined—she does a little of everything; but in the towns it is different, there she only does certain things, the men do the rest. For instance, a hotel chambermaid has nothing to do but make beds and fires in fifty or sixty rooms, bring towels and candles, and fetch several tons of water up several flights of stairs, a hundred pounds at a time, in prodigious metal pitchers. She does not have to work more than eighteen or twenty hours a day, and she can always get down on her knees and scrub the floors of halls and closets when she is tired and needs a rest.

As the morning advanced and the weather grew hot, we took off our outside clothing and sat in a row along the edge of the raft and enjoyed the scenery, with our sun-umbrellas over our heads and our legs dangling in the water.

Every now and then we plunged in and had a swim. Every projecting grassy cape had its joyous group of naked children, the boys to themselves and the girls to themselves, the latter usually in care of some motherly dame who sat in the shade of a tree with her knitting. The little boys swam out to us, sometimes, but the little maids stood knee-deep in the water and stopped their splashing and frolicking to inspect the raft with their innocent eyes as it drifted by. Once we turned a corner suddenly and surprised a slender girl of twelve years or upward, just stepping into the water. She had not time to run, but she did what answered just as well; she promptly drew a lithe young willow bough athwart her white body with one hand, and then contemplated us with a simple and untroubled interest. Thus she stood while we glided by. She was a pretty creature, and she and her willow bough made a very pretty picture, and one which could not offend the modesty of the most fastidious spectator. Her white skin had a low bank of fresh green willows for background and effective contrast—for she stood against them—and above and out of them projected the eager faces and white shoulders of two smaller girls.

Toward noon we heard the inspiriting cry,—

"Where away?" shouted the captain.

"Three points off the weather bow!"

We ran forward to see the vessel. It proved to be a steamboat—for they had begun to run a steamer up the Neckar, for the first time in May. She was a tug, and one of a very peculiar build and aspect. I had often watched her from the hotel, and wondered how she propelled herself, for apparently she had no propeller or paddles. She came churning along, now, making a deal of noise of one kind or another, and aggravating it every now and then by blowing a hoarse whistle....