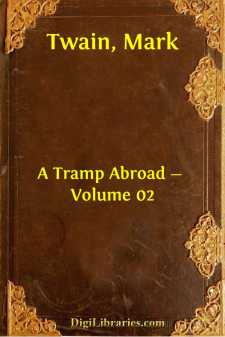 Much as the modern French duel is ridiculed by certain smart people, it is in reality one of the most dangerous institutions of our day. Since it is always fought in the open air, the combatants are nearly sure to catch cold. M. Paul de Cassagnac, the most inveterate of the French duelists, had suffered so often in this way that he is at last a confirmed invalid; and the best physician in Paris has expressed the opinion that if he goes on dueling for fifteen or twenty years more—unless he forms the habit of fighting in a comfortable room where damps and draughts cannot intrude—he will eventually endanger his life. This ought to moderate the talk of those people who are so stubborn in maintaining that the French duel is the most health-giving of recreations because of the open-air exercise it affords. And it ought also to moderate that foolish talk about French duelists and socialist-hated monarchs being the only people who are immoral.

But it is time to get at my subject. As soon as I heard of the late fiery outbreak between M. Gambetta and M. Fourtou in the French Assembly, I knew that trouble must follow. I knew it because a long personal friendship with M. Gambetta revealed to me the desperate and implacable nature of the man. Vast as are his physical proportions, I knew that the thirst for revenge would penetrate to the remotest frontiers of his person.

I did not wait for him to call on me, but went at once to him. As I had expected, I found the brave fellow steeped in a profound French calm. I say French calm, because French calmness and English calmness have points of difference.

He was moving swiftly back and forth among the debris of his furniture, now and then staving chance fragments of it across the room with his foot; grinding a constant grist of curses through his set teeth; and halting every little while to deposit another handful of his hair on the pile which he had been building of it on the table.

He threw his arms around my neck, bent me over his stomach to his breast, kissed me on both cheeks, hugged me four or five times, and then placed me in his own arm-chair. As soon as I had got well again, we began business at once.

I said I supposed he would wish me to act as his second, and he said, "Of course." I said I must be allowed to act under a French name, so that I might be shielded from obloquy in my country, in case of fatal results. He winced here, probably at the suggestion that dueling was not regarded with respect in America. However, he agreed to my requirement. This accounts for the fact that in all the newspaper reports M. Gambetta's second was apparently a Frenchman.

"I die for my God, for my country, for freedom of speech, for progress, and the universal brotherhood of man!"

I objected that this would require too lingering a death; it was a good speech for a consumptive, but not suited to the exigencies of the field of honor. We wrangled over a good many ante-mortem outbursts, but I finally got him to cut his obituary down to this, which he copied into his memorandum-book, purposing to get it by heart:

I said that this remark seemed to lack relevancy; but he said relevancy was a matter of no consequence in last words, what you wanted was thrill.

The next thing in order was the choice of weapons. My principal said he was not feeling well, and would leave that and the other details of the proposed meeting to me. Therefore I wrote the following note and carried it to M....