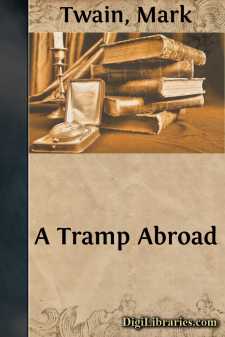 CHAPTER I [The Knighted Knave of Bergen]

One day it occurred to me that it had been many years since the world had been afforded the spectacle of a man adventurous enough to undertake a journey through Europe on foot. After much thought, I decided that I was a person fitted to furnish to mankind this spectacle. So I determined to do it. This was in March, 1878.

I looked about me for the right sort of person to accompany me in the capacity of agent, and finally hired a Mr. Harris for this service.

It was also my purpose to study art while in Europe. Mr. Harris was in sympathy with me in this. He was as much of an enthusiast in art as I was, and not less anxious to learn to paint. I desired to learn the German language; so did Harris.

Toward the middle of April we sailed in the HOLSATIA, Captain Brandt, and had a very pleasant trip, indeed.

After a brief rest at Hamburg, we made preparations for a long pedestrian trip southward in the soft spring weather, but at the last moment we changed the program, for private reasons, and took the express-train.

We made a short halt at Frankfort-on-the-Main, and found it an interesting city. I would have liked to visit the birthplace of Gutenburg, but it could not be done, as no memorandum of the site of the house has been kept. So we spent an hour in the Goethe mansion instead. The city permits this house to belong to private parties, instead of gracing and dignifying herself with the honor of possessing and protecting it.

Frankfort is one of the sixteen cities which have the distinction of being the place where the following incident occurred. Charlemagne, while chasing the Saxons (as HE said), or being chased by them (as THEY said), arrived at the bank of the river at dawn, in a fog. The enemy were either before him or behind him; but in any case he wanted to get across, very badly. He would have given anything for a guide, but none was to be had. Presently he saw a deer, followed by her young, approach the water. He watched her, judging that she would seek a ford, and he was right. She waded over, and the army followed. So a great Frankish victory or defeat was gained or avoided; and in order to commemorate the episode, Charlemagne commanded a city to be built there, which he named Frankfort—the ford of the Franks. None of the other cities where this event happened were named for it. This is good evidence that Frankfort was the first place it occurred at.

Frankfort has another distinction—it is the birthplace of the German alphabet; or at least of the German word for alphabet —BUCHSTABEN. They say that the first movable types were made on birch sticks—BUCHSTABE—hence the name.

I was taught a lesson in political economy in Frankfort. I had brought from home a box containing a thousand very cheap cigars. By way of experiment, I stepped into a little shop in a queer old back street, took four gaily decorated boxes of wax matches and three cigars, and laid down a silver piece worth 48 cents. The man gave me 43 cents change....