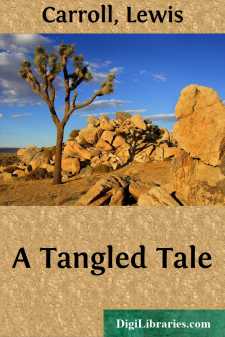 "Goblin, lead them up and down."

The ruddy glow of sunset was already fading into the sombre shadows of night, when two travellers might have been observed swiftly—at a pace of six miles in the hour—descending the rugged side of a mountain; the younger bounding from crag to crag with the agility of a fawn, while his companion, whose aged limbs seemed ill at ease in the heavy chain armour habitually worn by tourists in that district, toiled on painfully at his side.

As is always the case under such circumstances, the younger knight was the first to break the silence.

"A goodly pace, I trow!" he exclaimed. "We sped not thus in the ascent!"

"Goodly, indeed!" the other echoed with a groan. "We clomb it but at three miles in the hour."

"And on the dead level our pace is——?" the younger suggested; for he was weak in statistics, and left all such details to his aged companion.

"Four miles in the hour," the other wearily replied. "Not an ounce more," he added, with that love of metaphor so common in old age, "and not a farthing less!"

"'Twas three hours past high noon when we left our hostelry," the young man said, musingly. "We shall scarce be back by supper-time. Perchance mine host will roundly deny us all food!"

"He will chide our tardy return," was the grave reply, "and such a rebuke will be meet."

"A brave conceit!" cried the other, with a merry laugh. "And should we bid him bring us yet another course, I trow his answer will be tart!"

"We shall but get our deserts," sighed the elder knight, who had never seen a joke in his life, and was somewhat displeased at his companion's untimely levity. "'Twill be nine of the clock," he added in an undertone, "by the time we regain our hostelry. Full many a mile shall we have plodded this day!"

"How many? How many?" cried the eager youth, ever athirst for knowledge.

The old man was silent.

"Tell me," he answered, after a moment's thought, "what time it was when we stood together on yonder peak. Not exact to the minute!" he added hastily, reading a protest in the young man's face. "An' thy guess be within one poor half-hour of the mark, 'tis all I ask of thy mother's son! Then will I tell thee, true to the last inch, how far we shall have trudged betwixt three and nine of the clock."

A groan was the young man's only reply; while his convulsed features and the deep wrinkles that chased each other across his manly brow, revealed the abyss of arithmetical agony into which one chance question had plunged him.

KNOT II. ELIGIBLE APARTMENTS. "Straight down the crooked lane,And all round the square."

No more words were needed: the two brothers understood each other perfectly.

"BALBUS WAS ASSISTING HIS MOTHER-IN-LAW TO CONVINCE THE DRAGON."

Balbus was waiting for them at the hotel: the journey down had tired him, he said: so his two pupils had been the round of the place, in search of lodgings, without the old tutor who had been their inseparable companion from their childhood....