A Tale of a Lonely Parish 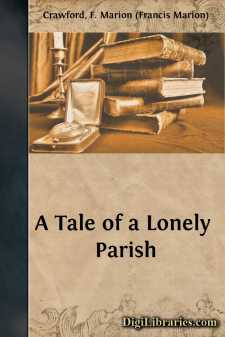 The Reverend Augustin Ambrose would gladly have given up taking pupils. He was growing old and his sight was beginning to trouble him; he was very weary of Thucydides, of Homer, of the works of Mr. Todhunter of which the green bindings expressed a hope still unrealised, of conic sections—even of his beloved Horace. He was tired of the stupidities of the dull young men who were sent to him because they could not "keep up", and he had long ceased to be surprised or interested by the remarks of the clever ones who were sent to him because their education had not prepared them for an English University. The dull ones could never be made to understand anything, though Mr. Ambrose generally succeeded in making them remember enough to matriculate, by dint of ceaseless repetition and a system of memoria technica which embraced most things necessary to the salvation of dull youth. The clever ones, on the other hand, generally lacked altogether the solid foundation of learning; they could construe fluently but did not know a long syllable from a short one; they had vague notions of elemental algebra and no notion at all of arithmetic, but did very well in conic sections; they knew nothing of prosody, but dabbled perpetually in English blank verse; altogether they knew most of those things which they need not have known and they knew none of those things thoroughly which they ought to have known. After twenty years of experience Mr. Ambrose ascertained that it was easier to teach a stupid boy than a clever one, but that he would prefer not to teach at all.

Unfortunately the small tithes of a small country parish in Essex did not furnish a sufficient income for his needs. He had been a Fellow of Trinity College, Cambridge, within a few years of taking his degree, wherein he had obtained high honours. But he had married and had found himself obliged to accept the first living offered to him, to wit, the vicarage of Billingsfield, whereof his college held the rectory and received the great tithes. The entire income he obtained from his cure never at any time exceeded three hundred and forty-seven pounds, and in the year when it reached that high figure there had been an unusually large number of marriages. It was not surprising that the vicar should desire to improve his circumstances by receiving one or two pupils. He had married young, as has been said, and there had been children born to him, a son and a daughter. Mrs. Ambrose was a good manager and a good mother, and her husband had worked hard. Between them they had brought up their children exceedingly well. The son had in his turn entered the church, had exhibited a faculty of pushing his way which had not characterised his father, had got a curacy in a fashionable Yorkshire watering-place, and was thought to be on the way to obtain a first-rate living. In the course of time, too, the daughter had lost her heart to a young physician who had brilliant prospects and some personal fortune, and the Reverend Augustin Ambrose had given his consent to the union....