A Spoil of Office A Story of the Modern West 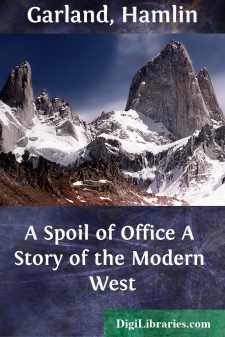 Early in the cool hush of a June morning in the seventies, a curious vehicle left Farmer Councill's door, loaded with a merry group of young people. It was a huge omnibus, constructed out of a heavy farm wagon and a hay rack, and was drawn by six horses. The driver was Councill's hired man, Bradley Talcott. Councill himself held between his vast knees the staff of a mighty flag in which they all took immense pride. The girls of the grange had made it for the day.

Laughter and scraps of song and rude witticisms made the huge wagon a bouquet of smiling faces. Everybody laughed, except Bradley, who sat with intent eyes and steady lips, his sinewy brown hand holding the excited horses in place. This intentness and self-mastery lent a sort of majesty to his rough-hewn face.

Behind them came teams, before them were teams, along every lane of the beautiful upland prairie, teams were rolling rapidly, all toward the south. The day was perfect summer; it made the heart of reticent Bradley Talcott ache with the beauty of it every time his thoughts went up to the blue sky. The larks, and bobolinks, and red-wings made every meadow riotous with song, and the ever-alert king-birds and flickers flew along from post to post as if to have a part in the celebration.

On every side stretched fields of wheat, green as emerald and soft as velvet. Some of it was high enough already to ripple in the soft winds. The corn fields showed their yellow-green rows of timid shoots, and cattle on the pastures luxuriated in the fullness of the June grass; the whole land was at its fairest and liberalest, and it seemed peculiarly fitting that the farmers should go on a picnic this day of all days.

At the four corners below stood scores of other wagons, loaded to the rim with men, women and children. Up and down the line rode Milton Jennings, the marshal of the day, exalted by the baton he held and the gay red sash looped across his shoulders. Everywhere rose merry shouts, and far away at the head of the procession the Burr Oak band was playing. All waited for the flag whose beautiful folds flamed afar in the bright sunlight.

Every member of the grange wore its quaint regalia, apron, sash, and pouch of white, orange, buff and red. Each grange was headed by banners, worked in silk by the patient fingers of the women. Counting the banners there were three Granges present—Liberty Grange, Meadow Grange, and Burr Oak Grange at the lead with the band. The marshal of the leading grange came charging back along the line, riding magnificently, his fiery little horse a-foam.

"Are we all ready?" he shouted like a field officer.

"Ready when you are," came the fusillade of replies.

He consulted a moment with Milton, the two horses prancing with unwonted excitement that transformed them into fiery chargers of romance, in the eyes of the boys and girls, just as the sash and baton transfigured Milton into something martial....