A Son of the Middle Border 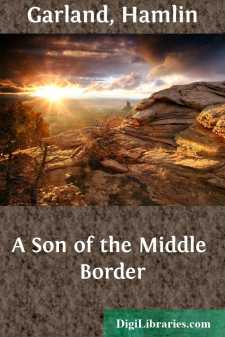 Home from the War

All of this universe known to me in the year 1864 was bounded by the wooded hills of a little Wisconsin coulee, and its center was the cottage in which my mother was living alone—my father was in the war. As I project myself back into that mystical age, half lights cover most of the valley. The road before our doorstone begins and ends in vague obscurity—and Granma Green's house at the fork of the trail stands on the very edge of the world in a sinister region peopled with bears and other menacing creatures. Beyond this point all is darkness and terror.

It is Sunday afternoon and my mother and her three children, Frank, Harriet and I (all in our best dresses) are visiting the Widow Green, our nearest neighbor, a plump, jolly woman whom we greatly love. The house swarms with stalwart men and buxom women and we are all sitting around the table heaped with the remains of a harvest feast. The women are "telling fortunes" by means of tea-grounds. Mrs. Green is the seeress. After shaking the cup with the grounds at the bottom, she turns it bottom side up in a saucer. Then whirling it three times to the right and three times to the left, she lifts it and silently studies the position of the leaves which cling to the sides of the cup, what time we all wait in breathless suspense for her first word.

"A soldier is coming to you!" she says to my mother. "See," and she points into the cup. We all crowd near, and I perceive a leaf with a stem sticking up from its body like a bayonet over a man's shoulder. "He is almost home," the widow goes on. Then with sudden dramatic turn she waves her hand toward the road, "Heavens and earth!" she cries. "There's Richard now!"

We all turn and look toward the road, and there, indeed, is a soldier with a musket on his back, wearily plodding his way up the low hill just north of the gate. He is too far away for mother to call, and besides I think she must have been a little uncertain, for he did not so much as turn his head toward the house. Trembling with excitement she hurries little Frank into his wagon and telling Hattie to bring me, sets off up the road as fast as she can draw the baby's cart. It all seems a dream to me and I move dumbly, almost stupidly like one in a mist....

We did not overtake the soldier, that is evident, for my next vision is that of a blue-coated figure leaning upon the fence, studying with intent gaze our empty cottage. I cannot, even now, precisely divine why he stood thus, sadly contemplating his silent home,—but so it was. His knapsack lay at his feet, his musket was propped against a post on whose top a cat was dreaming, unmindful of the warrior and his folded hands.

He did not hear us until we were close upon him, and even after he turned, my mother hesitated, so thin, so hollow-eyed, so changed was he. "Richard, is that you?" she quaveringly asked.

His worn face lighted up. His arms rose. "Yes, Belle! Here I am," he answered.

Nevertheless though he took my mother in his arms, I could not relate him to the father I had heard so much about....